This will not be of much interest to modellers unless you tend to suffer from the same neck or spinal injury that I do. Don't get me wrong, I'm not physically impaired and I only gave up playing Grid Iron this year after two seasons but I nevertheless have to manage two disc bulges in my upper vertebrae. A man's injuries are his own affair and of no interest to others BUT I believe I got this condition from years of bending over a table, painting and modelling since I was about twelve.

Now a matter of self management, the issue is now all about keeping my head up. So, what to do? I had to re-think my hobby area and came up with the following solution. 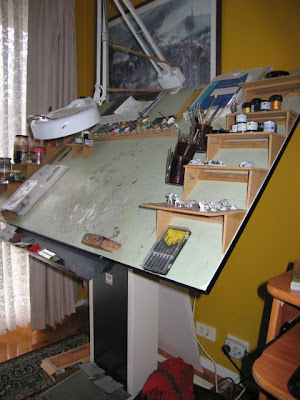 It's a second hand draughtsman's table I picked out in an office warehouse supplier and it has kept me in the game, so to speak. There were several to chose from and if anyone else needs to follow the same path, you shouldn't have difficulty in picking one up. For those of you who are strangers to these contraptions, you will notice two foot pedals at the base which engage gas compressors (like in an office swivel chair) - one raises the height and the other adjusts the pitch of the table from horizontal through to full-vertical. An unplanned benefit is that, whilst large, it takes up less space than an equivalent flat table.
It has a laminate surface and a most handy tray at the end which catches most objects when they slide off the surface. The laminate is actually quite soft and I have scored and sliced it to pieces and required further laminate. I will use the really hard kitchen laminate which I can cut across. Most of what else you see are the additions I have made and they remain in constant evolution.The two ledges near the base of the table surface above the tray are solid finished pine and are bolted on: used as rests for my elbows (very necessary). I have had to make a series of shelves to hold my work, I made buckets from plastic vitamin jars for my brushes and small tools, a ledge for paints (centre), attached document holders (top) and have items such as rulers hung in place. My lamp is a fluorescent magnifier, clamped to the top and I seem to spend most of my days off work with my chin resting on it. 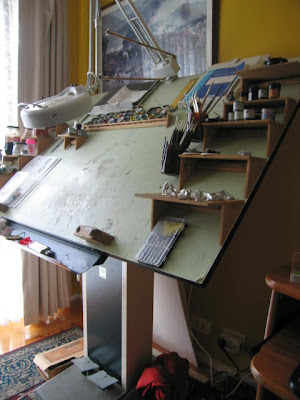 I have natural light to the left and out of shot to the right is my computer which I use for music, movies and references as I model away. Furthermore, my wife allows this in the living room so I am not isolated from the family - allowing me to achieve at least some level of output. I can recommend this set up to anyone interested in managing a similar injury or to avoid developing a similar condition. The only real issue I have is with building plastic models, but use the flat shelves on those occasions. I do spend some time on my hands and knees, eyes at pile level looking for modelling pits in the Persian rug after they rocket off the sprue, down the slippery slope and off to camouflage themselves, but I did that on flat tables also.
Posted by Unlucky General at 3:35 PM 2 comments: Links to this post