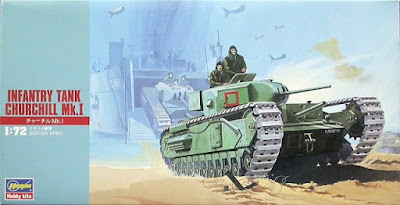 I lashed out last year and bought up the tanks, vehicles and two infantry battalions to build a Rapid Fire raid on Dieppe. I've been completely reliant on the Hasegewa 1/72nd scale kits for all of my Churchill Mark I and II variants which is proving bitter-sweet. Let me say they are in fact a lovely kit. Superbly engineered and designed, they fit together beautifully and are a simple kit to build. At least they would be if it weren't for the chespaling 'bobbins' I require for two of my tanks ('Chief' and 'Burns') and the deep wading intakes and snorkel exhausts for all of them.

Also, in my crude attempt to model the well documented tanks for the raid, particular attention needs to be paid to what to include, what to exclude from the kit in addition to the modifications required.

The Hasegawa kit comes with a rear and side stowage bin for the turret. The photographic record shows the Churchills without either of these additions. Now they could have been blown off I suppose but then all the vehicles had their baptism of fire at Dieppe and they were not intending to stay for long - so it's clear to me they were stripped down to bare essentials. The Hasegawa kit also provides for the turret a port side stowage tube for signal flags and that isn't evident at Dieppe either - so it's gone. 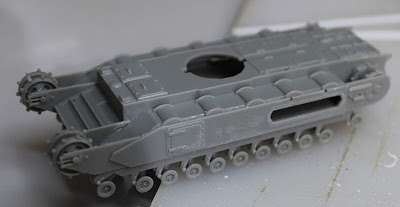 The kit comes with the original design downward intake louvers for the Mark I which I believe had all been inverted by 1942 operational vehicles. In any event, all Churchill intakes had been modified for the Dieppe raid with deep-wading exhausts which I fabricated in the first instance with styrene sheet - there were plenty of examples to follow. I have elected to have the tanks depicting their extensions jettisoned. Well, it's a bit of fiddling about which wasn't really floating my boat and then it dawned on me I'd need to repeat the restructure another six times. Stuff that for a lark.

The kit louvers were removed by carefully scrubbing the constructed chassis across some sandpaper of a couple of different grits. With very little detail damaged (surprisingly)  I was then left with some gaping holes which were larger than the cast replacement intakes. Typical. I fixed a section of the thinnest styrene card I had. This will be an inaccurate detail but I'm hoping it's not too noticeable. It does irritate me though. 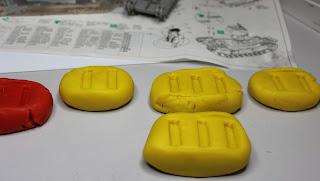 I then decided to try my hand a resin casting. One of the kits in my project is the Dragon 1/72 Churchill Mk III for the Dieppe raid which comes with the louver section in one piece. So I had a master. Now there's no getting hold of the means to make rubber moulds in Tonga but I did manage to score some Play Dough.

Well it worked well enough. Curiously the resin pieces took on a tint from the colour of the Play Dough. The pieces set in 24 hours but did require a light scrubbing with a toothbrush in water to remove the mucky Play Dough. The Play Dough cannot be re-used incidentally.

The next obstacle was creating the snorkel exhaust arrays. This has been heartbreaking and I've struggled to innovate. I elected to craft them from steel wire which was straight forward enough to form. I then drilled receiving holes on the mufflers (I am guessing they are mufflers) when my first critical failure occurred. The holes are near the end of each muffler piece and one snapped clean off during the hand-drilling. A liberal application of Selleys 2-Part Epoxy hasn't really worked too well. It's holding but on the wobbly side - certainly not 'fixed'.

The twin snorkel exhaust piped are braced at the top with a strut which I thought to make using fuse wire. Well that was a shit idea. In wrapping the wire I wasn't careful enough and I loosened the fitting. By this stage I was starting to lose my cool. 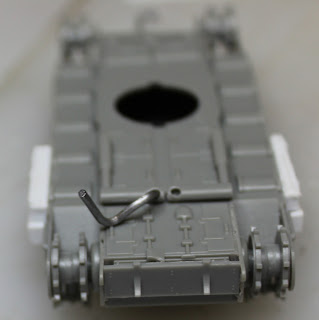 Normally everything works at the workbench for me but not this time. Even when switching to cotton thread the other array loosened. I may have erupted into an outraged outburst at this point. But wait, there's more. 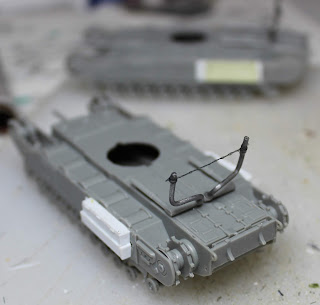 On a positive note, I have to say if you tire of assembling tank wheels as I do, then this is the tank and model for you. The entire bogey array comes in three cast pieces - inner wheel casting, the central suspension section and the outer wheels - that's just three pieces for 11 wheels each side. What's not to like? And they fit together with ease.
The tracks are black rubber one-piece molds which I know model makers hate. As a wargamer, I love 'em; they paint up just fine and I ensure the join is underneath and gets hidden when I base the models. This old trick was to prove essential as I managed to snap off a track section when trying to stretch it. One of the tracks was quite twisted so I thought to immerse it in hot water and then let it cool under slight tension to iron it out. NOT A GOOD IDEA. I boiled the water, poured it into a bowl and casually threw both tracks from one of the kits into the water only to see them instantly shrivel before my very eyes into what resembled a dead centipede! It also changed the molecular structure and went from loose rubber to a rigid plastic. Keeeerist ... I didn't know they could even do that! I was by this time beginning to despair - I'm supposed to have been enjoying this hobby of mine.
Well I've got the models to undercoat stage but will turn my nervous hand to building the others before proceeding to the paint jobs. I think I will attempt to texture the bases where they are exposed but at this time have no firm idea of how I'm going to create the chert beach of Dieppe. 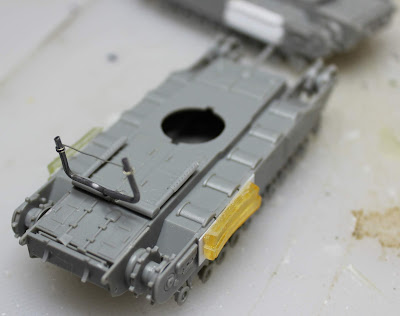 Upon much reflection I will not attempt further exhaust arrays until home in four weeks to score some aluminium tubing which will provide the right exhaust aperture. It is lighter in weight and will glue better. I will also buy solid aluminium rod in case the tubing pinches when forming it. It will also be capable of drilling and I can thread a rigid brace through it for better stability.
Posted by Unlucky General at 7:42 PM No comments: Links to this post 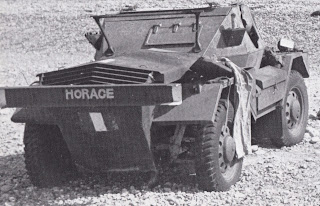 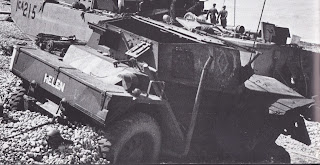 They were both Daimler 'Dingo' MkII Scout Cars belonging to the Canadian Calgary tank regiment whose crews defiantly took to White Beach on the shores of Dieppe in 1942. They also happen to be the subjects of my first 1/72nd or 20mm scale builds for my future Rapid Fire re-fight.
Horace hit the beach out of LCT 145 with the Regiment's 'Chief', 'Company' and 'Calgary' Churchill tanks. Helen arrived with Churchills 'Burns', 'Bolster' and 'Backer' out of LCT 126. After these two models the tanks will be next but in the meantime I had to source my scout cars and crew. 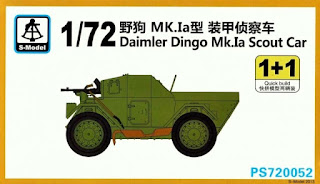 The S Model Mk Ia variant was the only example I could find so I knew I had a conversion or two ahead of me. The kit comes with what I can only describe as an additional mystery sprue with no explanation of what the parts are or where to put them. Only the shovel is attributed and apart from the tin hat and a rifle the rest is, well ... a mystery. But the essential components and instructions are well provided for. 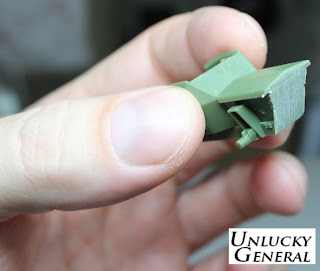 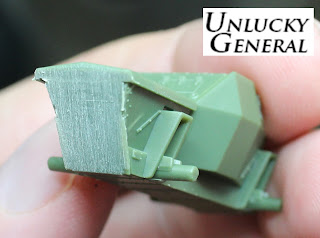 First job was to sand back the sloping rear face which included the details of the Mk Ia engine vent/grille. Then I elected to sand back the top edge to provide for the perpendicular sloping face into which the Mk II vent would go. 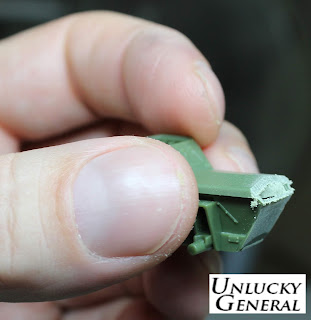 I then started scratching my head to figure how I would approach constructing the vent/grille. I ended up inserting a central support and built it strand-by-strand; first fixing one side to the centre and allowing it to set before warping it to the other side.

I cut each strip from a sheet of Evergreen Scale Models sheet styrene and being no model-maker (and unsophisticated) I did it all with Humbrol Poly Cement. After all, these are wargaming toys - not oooh-ahhh display models. I'm sure there are several better approaches to this construction but it worked in the end. 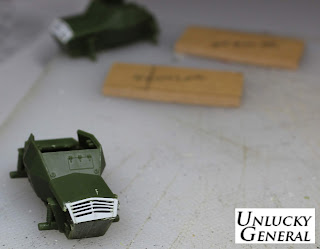 At least I think they will pass muster if no expert looks too closely. I am using AB miniatures for all Canadian infantry and crew and so clumsily glued two poly strips into the base of each vehicle to support my driver and gunner/observer. 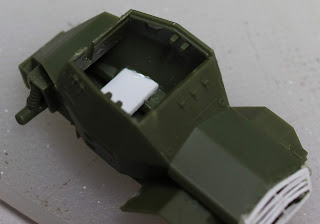 I also had to cut away the receiving lugs for the roof piece to squeeze in the crew figures. They also took a bit of filing. The early variants of the Dingo were supplied with a folding steel roof. This model came with the roof section in one piece, all buttoned up. I cut the roof, folding the front section back over the rear - well, glued the completely separate piece onto the rear section to simulate it folded back. 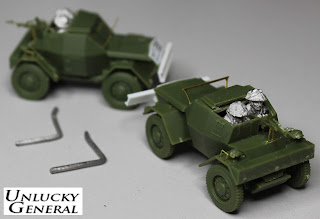 The gunner doesn't align overly well with the fixed Bren Gun. In fact the sculpt of this seated figure is posed for a larger, twin grip machine gun rather than the pistol grip of the Bren. The girder sections fixed to the rear were trimmed narrower after this shot. I don't know what their purpose was but I knew I needed them all the same. 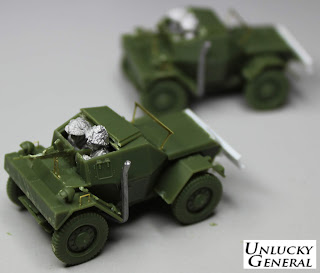 The kit comes with brass etched forward grips, the Bren stand and the rear support. I noted from the photos that a special exhaust was fitted so reached for my trusty container of odd & sods and hey-presto ... some white metal rods from an old spear or something came into play. Easily manipulated and the end drilled for a pipe effect, they were drilled and glued into place.
If it weren't for the kit-bashing required these two models would have been supremely easy constructions. The designers behind this model really knew what they were doing. It fits together just superbly. Now all that's left is basing and painting for Part 2.


Posted by Unlucky General at 9:14 PM 2 comments: Links to this post