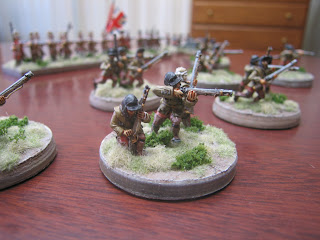 Well I thought to knock out a snappy 20 figure unit after my efforts with the Fraser Highlanders. It predictably took longer to do than I had thought and with my return to work, my time at the work table is severely reduced to it's normal, low fraction. My Quebec army has two Light battalions - one a composite Light battalion and the other a permanent Light Battalion under the command of Major John Dalling. 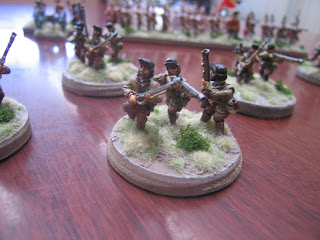 I have been able to find out little of John Dalling or indeed much about his light battalion except that he was of the 28th foot and his captains were William Delaune (67th foot) and John Carden (60th). I have uniformed them as a regular or permanent Light battalion and modelled them from the illustration of Gages' Light Infantry by Embleton (Wolfe's Army, Osprey Men-at-Arms 48). I ended up only including one officer (Dalling himself) and had him clad in the non-descript light infantryman style adopted under that philosophy of the British army in America. It seemed more appropriate that the captains and sergeants allowed for in my lists would be hard to identify in such a unit. 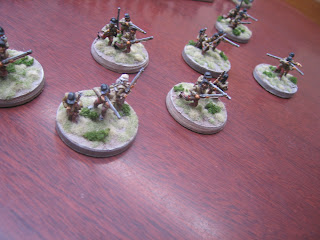 As with the rest of this build, I have opted for a 6mm base (my first) and for the Lights I have gone with a series of circular cut bases to identify them more easily as skirmishers. I have opted for 6mm think bases as one naturally picks them up by the base rather than the figure and they should stand well within teddy-bear fur scenery. I had intended to opt for two skirmishers to a base but had a lack of material at the time of cutting and so I economised. Happily, I am better pleased with the look of the unit in threes with Dalling being based two to a stand. Whilst tempted to cover the bases with logs and fallen foliage, I have kept their bases consistent with the rest of the army: largely faded green and dry grass patches after the burn off of high summer with tufts of scrub indicating unimproved pasture. 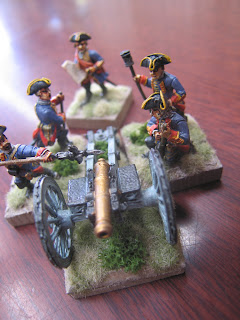 FIRST 100
I have photographed this lot as I waited to base my two guns and the Louisberg Grenadiers until now. Together with my 58 Fraser Highlanders this brings the project to the first 100 figures completed. Each of the three companies of the Louisberg grenadiers is represented in equal proportions (22nd, 40th and 45th) and is arrayed in the two ranks adopted at Quebec. The unit is depicted as delivering the first massed and double shotted volley. 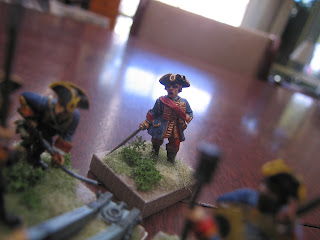 The two guns (brass 6 pounders) have no limbers as they were man-handled and carried to the field from the boats and up the escarpment. If anyone else chooses to model this battle, I was toying with the idea of having a gun being towed with crew and ropes - I should like to see that. The crews are all regular Royal Artillery and I replaced the blade of the sword carried by one officer by hammering out and cutting a steel wire - something I intend doing more of in future. 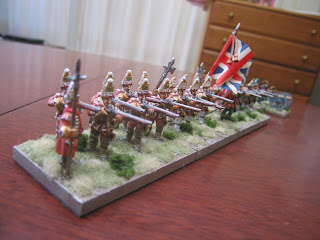 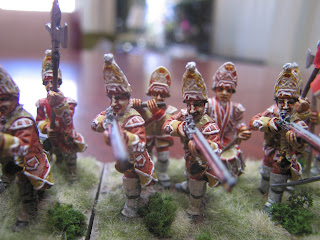 Posted by Unlucky General at 7:13 PM