I have modeled this Fokker EIII on that flown by Kurt Student in early 1916. More famous and best known for his pioneering generalship of the Fallshirmjager in WWII, I learned of his exploits as a pilot in the Great War and thought to model his machine rather than one of Imperial Germany’s famous aces. Unlike most of his more accomplished counterparts, Student of course survived the war, survived the next one, his trial and short term of imprisonment to live a long life until 1978, aged 88. As you will read, I also modeled this particular airframe because Student failed to score any confirmed ‘victories’ in it. I rather like the idea of representing a young, keen and no doubt aggressive young pilot, cruising about the skies, frustrated with his failure to find and defeat his enemies. There’s something a little challenging to me in celebrating a pilots score of ‘murders’ and then venerating them for it so this trade-off suits me nicely.
PILOT
First; a little about the man. Kurt Arthur Benno Student was born in Birkhonz, Germany on 12th May 1890 – yes, he was a Taurus. A graduate of the Royal Prussian Cadet School, Potsdam, Student entered the Imperial German Army as an officer candidate in 1910 and was commissioned a lieutenant in March 1911. Clearly, the young Student was a product of the Prussian military machine. At the outbreak of war, he served with the Jägers then transferred to pilot training and obtained his military pilot license on 8th August 1913. From 2nd August 1914 to 31st March 1914 he was attached to Flying Station Posen (Eastern Front) with Fleiger Battalion 2 and made an active pilot on 2nd June.
From 2nd August 1914 to 9th February 1916 he flew with Feldfleiger-Abteilung 17 (Field Flying Detachment 17) and achieved the rank of Oberleutnant on 18th June 1915. Of interest to me were his next two assignments. He transferred on 10th February to Kampftaffel 19/Kampfgeschwader 4 of the Army High Command till 16th May 1916 and from there on 17th May until 15th October 1916 with the 3rd Army Fokkerstaffel - a hunting group of Fokker EIII and EIV’s. It was here that Kurt Student scored his first three confirmed victories.
Student was credited with six confirmed and one unconfirmed victories as a fighter pilot in the Great War. Whilst his first and unconfirmed score was on the Eastern Front, I am more concerned with his first three official scores. He was credited on 6th July 1916 with forcing a Nieuport 11 to land when engaging it over Peronne. What is particularly interesting about this chivalrous victory was that he later flew it himself in combat of which there is surviving photographic evidence. This victory was followed by his defeat of a Caudron over Vaux on 1st August 1916 and then another Nieuport over North St. Souplet on 8th August 1916.
References state Student claimed to have secured these confirmed victories flying his ‘faithful’ Fokker EIV. The Fokker EIV largely appeared in service from June 1916. As we have the attached photo of our young Oberleutnant posing with his machine’s ground crew beside what is clearly ‘his’ Fokker EIII, I can only conclude that what is believed to be Fokker EIII 409/15 was flown by Student in the months prior to his adoption of the EIV. I am presuming he flew the EIII sometime at least between his posting to Kampftaffel 19 and up to June 1916 in time for his adoption of the EIV and his subsequent forcing down of the Nieuport 11 on 6th July. 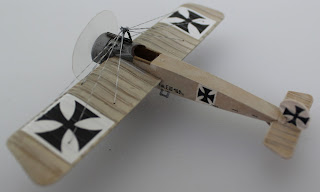 MODEL
This attempt is from the 1/72nd scale Revell plastic kit. This was a surprisingly simple and straight forward model to assemble but there are a couple of tips which it lacked and I'd like to pass on. First is the need to consider if you are going to rig your model. Many wargamers in this scale do not - I feel the need. There are two wires stemming from the engine cowling to the inner forward holes - which are partly formed in the model, you just need to drill them through. There is no explanation as to how you are supposed to thread through the cowling but I elected to drill the holes myself and fix the ends on the inside of the engine assembly with Superglue before fixing it to the fuselage. This means for much of the assembling, there are two loose threads dangling about but after the model is painted, it's a simple matter to thread them through the wings and tie them off at the undercarriage.
For my model, I had the above photograph to work from. The decals for the fuselage do not come with the white background for the imperial cross. You will need to paint it on before applying the decals - something I failed to anticipate and ended up painting around the decal. Tricky and less precise and not recommended.

Having learnt from my previous Pfalz eindecker, I replaced the flimsy plastic support strut on top of the fuselage with a steel wire I fashioned myself. My wire extends below the engine cover down the floor of the fuselage and is buried in a lump of Greenstuff. The wire is also fixed with Superglue through the holes I was required to drill through the engine cover. The bend is not the acute angle of the real thing or the plastic part (being bowed) and the apex required some wrapped and Superglue thread prior to the rigging to prevent the support threads slipping off the central point. The support is incredibly rigid and took the strain to prevent slack in the rayon thread I used. 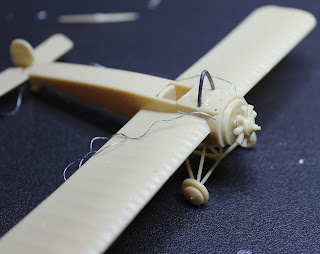 You can also see from this shot another hole (of which there are two) for two further wires which I should have pre-threaded. 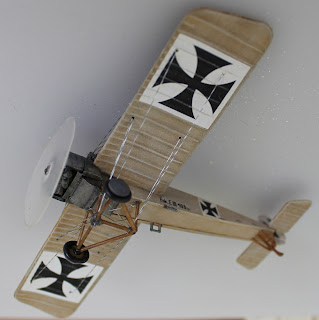 My first image is a bit of nonsense I've been keeping in mind to imitate since seeing a similar graphic on someone else's blog. As yet, I have no pilot so the effect is incomplete. I can't abide the lifeless, ill-defined blob which came with the kit and am awaiting a replacement. Perhaps the above shot might have been better against a cloudy sky? Anyway, for those in the know, it was a straight forward enough Masking exercise which took some time to define properly - especially for the propeller. The image was taken from a photo taken against an orange background which shows through - I'll bet getter next time and even throw in some effects like fumes and a flack burst.
Posted by Unlucky General at 6:52 PM 1 comment: Links to this post

Having completed painting the first half of my grand 48th battalion of foot for my Quebec British army, I thought to submit a post-script regarding the Crusader Miniatures British Seven Years War figures. Firstly, let me say they were a joy to paint and just as well given the numbers I have committed to for this one battalion. It is an interesting fact that you can never really appreciate a model soldier fully until you've painted it. The un-coated, bare white metal figurine can hide detail and present new difficulties even after the undercoat is applied and the full complexity of any sculpt is rarely revealed until after a painter starts to 'colour his world'. 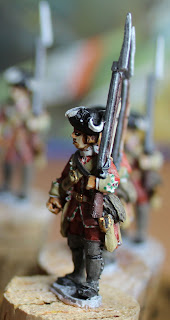 At this stage I have as yet to paint any grenadiers or any musicians (drummers). The level of simple detail and the depth of some features simply drove me to put extra effort on such things as their hide kit bags. I ended up apply three shades of dry brushing to raise the relief of the fur. I would also like to amend a previous comment I made about the identicle faces. Whilst the variously and subtly posed figures have a strong likeness to one another, they are in fact different, made more so with the application of paint - at least with my 'washing' style. These chaps really came to life for me which again spurred me to put just that little bit extra into them. I had previously commented on the fine lace relief and that did prove fiddly and thus slow going. Having said that, the rise from the body caught the paint off the brush easily enough and it proved less hard going than I anticipated. Thanks to an old mate of mine (Grant) who reminded me to use a tooth-pick to dot the lace, what could have been nightmarish was only laborious. Hell ... I'll take what I can get.

I was pleasantly surprised about the poses themselves inasmuch as some details were hid and I avoided several pain points such as the pocket lace. In fact, much of the lace is hidden by external kit and the positioning of the arms and musket. There is defined lace for the rear of the waistcoat, exposed by the turn backs which I elected not to paint. Most half of the left lapel and coat lace for both pockets are obscured. In turn, the musket underside is couched in the crook of the left arm hiding the trigger and guard with the musket bracing covered by the musket sling. All very handy. Whilst I prefer painting bigger gaiter buttons found on other sculpts, these are simply far more accurate with a better finish. There is no butt-plate on the musked stock (less detail for me) and I had no inclination to affect one through painting. Also, the ram-rod end is not well detailed but again, this does not detract from the painted figure. Many of these details are most probably over emphasized on other figures for the 28mm scale in any event but that's no doubt up for debate. I ended up applying a wash to the musket barrels and locks after my traditional aluminium over gun-metal approach and am pleased with the effect.For some reason these figures asked for it and now I see myself doing so in future for all muskets. What is it about getting fussier with age? 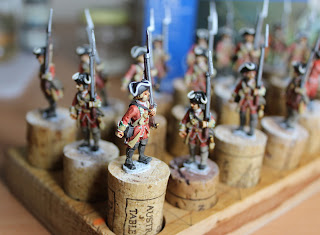 I'm not able to base these figures whilst I am stationed in the Pacific as I will transport them wrapped on my trips home. Nevertheless I couldn't help but lay them out for the grand shot of the half-battalion. Incidentally, they stand up on their own - well centred and balanced with very neat bases. No blue-tack! Now that I've freed up my cork painting stands, I can move on to the rest of them and the first of my Light Brigade regiments for Balaclava which will feature on my other Blog.
﻿

Posted by Unlucky General at 10:36 PM 4 comments: Links to this post