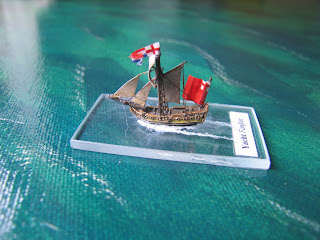 After an absence from my work table for three months (due to the imposition of work duties) I have returned and finished a half started model - me yacht.  This little chap is a 1:1200 scale Langton Miniatures Royal Yacht (AD 10) from Rod's Anglo Dutch series of superb models. For me, this yacht will serve as my Yacht the Fanfan. 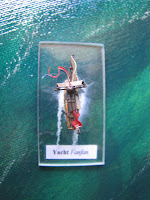 The Fanfan served in the Red Squadron at the Saint James Day Fight on 4 August 1666 and whilst they may have had an armament of up to eight guns (presumably small calibre) the Fanfan appears to have had only two to defend itself on the day (1).

Derived from the Dutch word for 'hunt', the English fleet had only just introduced the yacht into service from the United Provinces earlier that century which were seen as ideal dispatch and courier vessels. One of several built but his time, the Fanfan was commissioned by Prince Rupert in 1666 and appears to have survived the war, being relegated to harbour transport in 1692. 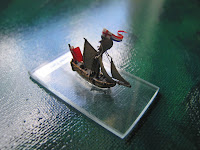 I have photographed the Fanfan with a similarly small berth escourt, namely another Langton Miniatures vessel - a small merchantmen or ketch (two masts) also from his Anglo Dutch collection (AD12). I have a fondness for these smaller vessels and have elected to commence my wargaming collection starting from the tiny and working my way up. To fight by their side, I am about to commence building the English 6th Rate Drake, also of the aforementioned Red Squadron who will team together to fight in combinations against a Pinas, Cromster and a Dutch Fluit. After that, I will build my remaining heaviest ships, the English 4th rate Bristol and the Dutch 46 gun Dordrecht. 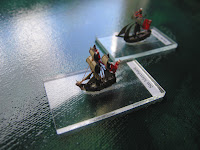 I have a perhaps obvious preference for a greenish sea just to be different but also inspired from several paintings of the era. Nevertheless, I have based all by vessels on 3mm glass in accordance with the recommended Langton dimensions which I cut myself  - it's surprising how competent you can get at it with only the smallest amount of practice. I wanted glass so it wouldn't scratch and sits under a better weight than perspex. It also means I can fight on other different coloured surfaces.