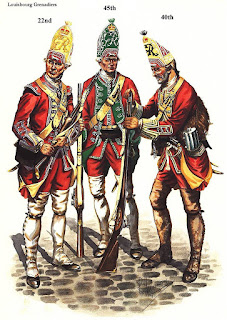 Having already posed on my thoughts concerning a flag for this battalion (they’re going to get one) I now turn to the appearance of the unit. This will be battalion arrayed in a firing line two deep, all musketeers firing from the standing position, the front rank being off- set to the rear rank to deliver their volleys.
Once again, I have turned to Redoubt Miniatures to supply my host with a few extras such as a different looking officer, sergeant and a fifer from Front Rank to complete the unit. One compelling reason for completing the unit with Front Rank is the wastage I would have otherwise experienced from Redoubt's six figure packaging - sometimes I just don't need four spare figures left over.
The assembly of the Louisberg Grenadiers from three parent regiments lends itself to a three division deployment to my way of thinking. Being the senior company (numerically) the 22nd will be my centre division with musicians and ensign. The Grenadiers were placed under the command of Lt Colonel Alex Murray (abovementioned 'different' officer figure) who will also be depicted with the centre company – on foot, naturally.
Whilst I am not fielding separate musicians for the other companies, I may make either the drummer or fifer with the centre division from one of the other two companies of the 45th or 40th grenadiers to assist representing the nature of this amalgamated unit. Whilst common in later times, this is the only such converged grenadier battalion for the Quebec campaign.


My battalion will look something like the following diagram:  light blue for musketeers, green for sergeant; red for officers, yellow for musicians, grey for the ensign and white for the Lt Colonel. Just as soon as I get my figures in the post, I'll do a review - which are thin on the ground from what I have been able to find on the internet.

Posted by Unlucky General at 6:30 AM