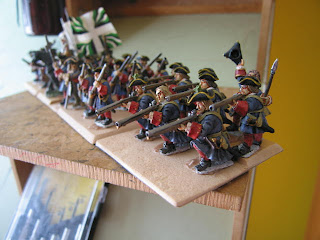 It's been a while since I updated the Blog but then it's taken me some time, working on two Dutch battalions at one time. I previously posted a dummy set up for my revisited army for the War of the Spanish Succession and this is the based result for the first painted battalions. I should say the first stages of basing as I have yet to commence the putty sculpting, painting and flocking. The photos in this posting are of one of those battalions only: my representation of Tscharner's Swiss battalion in Dutch service (raised in Berne and maintained by Holland) as they may have looked at Ramillies in 1706. 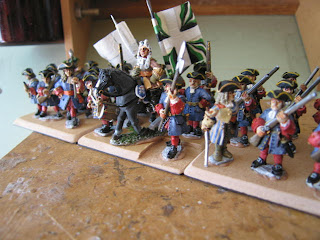 The figures are mainly Wargames Foundry with a sprinkling of Front Rank and the mounted Colonel Commandant (representing Gabriel May of Huning) is from Dixon miniatures. You will notice the recessed sections of base where I have cut into the MDF craftwood. My Front Rank figures are a few millimetres taller than the others and the lower level bases drops their height by a couple of milimetres for a better match. This was particularly important for the kneeling front rank of my firing platoons; Front Rank being the only manufacturer to offer this pose. The flags are hand painted representing the battalion and colonel's colours. 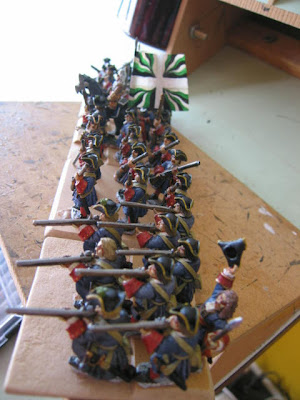 As a devotee of Grand Manner wargaming, I am representing my battalion as a 36 figure unit, but the others will average 33. I am basing them in three ranks to better reflect the typical period Dutch formations and I have each base containg nine figures on a 60 by 60 millimetre base. To simulate platoon firing I have one base firing, one loading and one at the ready all supported by a command and colour party base. I may consider attempting to represent two firings across the frontage. Whilst the Swiss battalions fielded no grenadiers, my other unit has their three figure grenadier company represented as one file on the right flank. By the end of the Easter weekend I hope to have my first demi-brigade completed and will post accordingly.
Email Post
Labels: War of the Spanish Succession