Baptism of Fire and Water

A long time between postings I know; however, I just got back from my first wargame using the wonderful Langton Miniatures Dutch Wars models and the equally wonderful naval warfare rules, Form Line of Battle by David Manley.

My good friend Matt and I adopted most of the optional rules for smaller actions and I created adapted game record cards for each ship complete with graphics taken from across the internet. On this point I feel it important to capture as much of the feel for the period as possible through the use of line drawings or even naval paintings from the period. We found the limitations in the cards and will try a couple more adaptions before transferring my cards to peg boards to track the ship records without pencil and paper. We suspect we mis-played the damage rule but kept consistency which evened everything out. 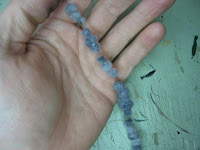 The first time you play these rules you need to make a few markers and tools from the rules - printing out and basing on card stock: that sort of thing. Whilst turning my thoughts to broadside markers (important for tracking gunnery) I thought of rolling pre-sprayed synthetic wadding into tiny balls, threading them along needle and cotton with a dab of white glue to hold each ball. As you can see, it's not unlike making a bead necklace. I made five ball sections for my 4th and 5th rates and three balls lenghts for my smaller, unrated vessels. 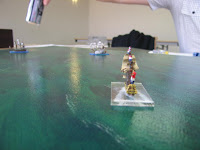 We played two games in under five hours, taking a 40 minute lunch break. We both agree they are great rules and makes for an enjoyable naval skirmish game. We played with two vessels each both times, varying our ships each time. Whilst we also believe we mis-played the weather changes, it made for a chaotic and fun struggle and best of all, we had a win each - you can't say fairer than that.
A few thoughts on our depictions. I have green sea boards as you can see - a preference taken from some paintings of the period and also from a desire to be a little different - this is the Channel - not the Med. I nevertheless based my models on glass with superglue, paining the foaming wake with Humbrol gloss white. This way I can play on any coloured surface. Matt's ships are on more traditional blue but you know, it didn't make that much of a difference. I had some toothpicks (cocktail sticks) for fallen masts but none were lost. I don't think I'll go for anything more decorative than that for the masts because whilst you can buy fallen masts, the models will still have their masts upright as part of the model so what's the point?
Email Post
Labels: Anglo-Dutch Naval