The opening image here is of the centrefold background of the Roman Gladiator Letroset Action Transfer ﻿release. If you know what I'm talking about then you'll most probably be an early generation 'X' like myself. I grew up on these things and couldn't get enough of them. Looking at the crowd gave me an idea about augmenting my up-coming gladiator project.
﻿
Most gamers from what I've seen build or buy partial or even full model arenas which, whilst often beautifully rendered, are just a back-drop to the game. They also suffer from a chronic lack of an audience and, let's face it, whose going to be bothered about painting hundreds of figures who merely spectate? Well, not me anyway. Yet the crowd is very much a part of the spectacle so I turned to my childhood references for inspiration. Left is an illustration from my Ladybird book Great Civilisations: Rome. I still wanted an arena but one which is merely decorative, not fixed - something which is purely a background for reference but brings the audience into play. 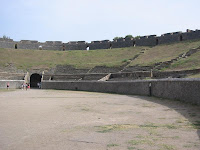 I looked at the Pompeii Arena as being one of, if not the oldest known arena surviving today. It's very intact and simple. Unlike the Colosseum, my backdrop was to have no doorways - I just wanted a plain stretch of wall with a stand or two behind and above. Even if used as a set to photograph my models against, I assume the focus of the eye will always be on the miniatures and play in front of it.
﻿
In spite of searching the internet for a ready to use image, whilst coming close, there was nothing I felt I could use so it was literally back to the drawing board. I sketched the front stands of the arena, then 'inked' over my work before colouring with pencils and hard pastels. The stone work for the boundary wall was downloaded from the internet and then cut and pasted on to my work.
﻿﻿﻿﻿﻿﻿﻿﻿﻿
I went through a crisis of confidence during the colouring stages - always preferring the basic sketch work and whilst this could have remained an option for the finished product, I pushed on with a full colour version.﻿ As you can see, this is early in the day and the crowds are only beginning to build. I tried giving the individuals some character and animation rather than the massed sea of heads. 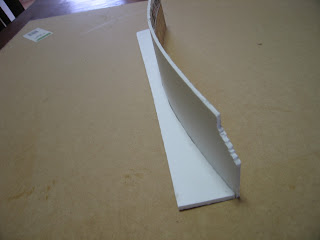 I mounted the finished artwork on 3 millimetre foam board, then glued that to a 5 millimetre rectangular base section with an inside curve cut into it - giving the shape and stand for the model. I have to confess that I've done all of this because I want to have some gladiators but have yet to buy any. They will fight on large hex paper, using the Avalon Hill Gladiator game system.

Here is the finished product and I admit to being quite happy with it. There will be no leaning over it and it won't get in the way. The Avalon Hill game uses a limitless field principle where playing pieces (or models in my game) get repositioned toward the centre whenever they drift off - making sure to keep their positions relative to one another. My arena will simply be kept to one side - out of the way, yet in view. AND, all this in only half a day. 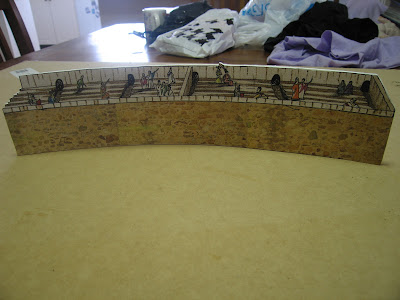