INTRODUCTION
This is my second review for the long standing Redoubt Enterprises figures range from their French and Indian Wars catalogue and for this review I am covering the Scottish infantry, both Line and Grenadier figures. I do this whilst their undercoat dries.

PRODUCT AVAILABILITY SALES AND SERVICE
Redoubt Enterprises are particularly accommodating and hand any sized order. For the other details see my previous review.
﻿
F&I 270 (LINE) and F&I 290 (Grenadier) STANDING COMMAND
This particular range is well photographed but I have included some additional shots of my own using portrait and macro zoom functions on my Canon PowerShot S70. My figures have already been undercoated in white which I think helps bring out some of the detail. For a detailed size comparison with other ranges, see my previous posting under the Quebec label but for your reference, most figures in the line range stand 34mm tall from base to the highest point on their bonnets; the grenadiers standing 38mm to the top of their bearskins. All stand 28mm from the foot to the eye. They are one of the larger scale figures within the 25-28mm miniatures market as well as being solid but well proportioned, the sculptor having avoided that ‘over-fed’ stockiness of some of the Front Rank figures ranges.

The Standing Command for both Line and Grenadier packs comes with six (6) figures in five (5) variants: an Officer (1), Sergeant (1), Ensign (2), Drummer (1) and a piper (1). As I am building a battalion at 1:9.2 representative troop scale of 58 figures, I could have done with one less ensign and an extra officer or sergeant per pack but these ratios are difficult to anticipate when marketing figures by the pack. Whilst I didn’t try, I’m sure Redoubt Enterprises could accommodate special orders.
Both Officers are solid castings with one arm raised ready to give an order and he wears a sash across his right shoulder. The face is animated (grimacing?) in expression. As with all of these figures, I find the detail crisp and anticipate they will be a joy to paint (their others have been). Whilst there is only one officer type for both Line (FIG 1) and Grenadier (FIG 2), conversion is possible and I have removed and repositioned the sword arm on one of them. Manipulation is not straight forward; however, as these are solid casts with generally confined animation or posturing of the soldier depicted with most limbs central to the casting. Together with the hair, the heads are not easily separated and are beyond twisting. Generally speaking, variance within the range is limited from a modeller’s perspective. 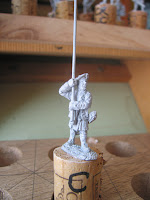 The Ensign(s) is standing square on (see left) and is an otherwise unremarkable but good looking and competent sculpt. The usefulness of the Grenadier Ensigns is somewhat of a mystery to me I confess – particularly so for the scarcity of Scottish regiments and Scottish Grenadiers of this period in particular. Even for a battalion of 58 figures with a full complement of Grenadiers present, I have no use for them. Back to the Line Ensigns, I had a surplus of them as I needed more officers and Sergeants and so converted one to an officer – see future 78th Fraser Highlanders modelling posting. This was achieved all the same with relative ease.

The Sergeants are both for Line (FIG 4) and Grenadiers  (FIG 3) a good looking and beautifully proportioned figure – possibly the best in the command packs. Again, standing square on they each hold a halberd (cast separately but if I have any criticism to make, it is that the bearskin on the Grenadier Sergeant looks almost precariously balanced or a trifle ill-fitting. Both have their left hands resting on their claymores and have neutral, almost casual expressions. Perhaps it’s their experience? 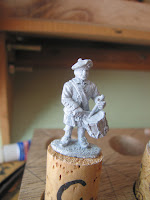 In my previous review I was quite critical of the British Line Grenadier drummer and it remains easily the worst sculpt I have seen from Redoubt Miniatures. I am pleased to report that no such deficiencies arise in either Line or Grenadiers drummers for the Scots (see left). Standing front on like the rest in these command packs, each plays the drum to his left and the crook of the elbow stands freely from the torso. The sticks are well defined with minimal casting join to the drum surface (a tricky area for the sculptor and the mould. In fact, I liked them so much I elected to include an additional Grenadier figure in my battalion in order to include their drummer. It was either him or the piper. 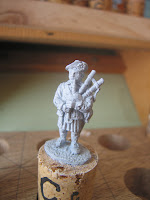 Being a Scots range, these command packs have the piper (see right)  in lieu of the second sergeant found with regular British packs. Again, both Line and Grenadier pipers are solid results and will paint up well but as before, unless representing a battalion with even more figures than I, the utility of the Grenadier piper is minimal. Also of note is the ‘attitude’ of both pipers – the face is expressionless (presumably at the end of the exhale) and the pipe bag is held in a neutral manner, tucked under the mid to lower left arm. As with the entire command packs, the expression of the piper is in contrast with the only animated figure in the pack – the officer. The officer is defiant with the sword up in the air but the rest of the group don’t look that fussed. That curiosity aside, both a very good packs indeed.

ACCURACY
The benefit of concentrating a figure range on the French & Indian Wars theatre of operations for the Seven Years War means less compromise in matching the catalogue to regimental variation. This is even more so with the Scots regiments. Whilst other might, I have no quibbles with the range and am well pleased. 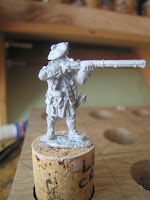 F&I 271 LINE and F&I 291 GRENADIER STANDING FIRING
As with the British Grenadier firing pose, I really like both of these. The same goes for the kneeling firing figures of both types and a great feature of Redoubt Enterprises packaging is that you can either buy six (6) all standing firing, kneeling firing or three (3) of each for all shooting figures in the F&I range. For these chaps, the same depth and crispness of detail is evident and all hold a good, long and stout representation of the musket used in North America (I stand corrected on a previous comment). In fact, the musket detail paint very well and the extra 2-3mm scale difference for this range have enabled a far better looking and identifiable firearm than most ranges out there. My Scots will be fighting, as at Quebec on the day in three ranks and I can’t wait to see how they look. 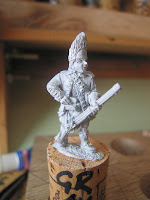 F&I 274 (LINE) and F&I 294 (GRENADIER) STANDING LOADING
I don’t know why Redoubt specifies ‘Standing’ loading as they provide no other option. This is another good figure in a good range. Unlike the others; however, the left hand and musket are separately cast and so they require a bit of gluing to complete the figure. I cannot see why that was necessary but it does allow for a small amount of pose variation through the attitude of the musket – I’ll take what I can get. The right hand is fumbling at the cartridge box and the figure stands obliquely to the front. It is on this figure, perhaps more than the rest which we are impacted by the bagging of the Grenadier kilt. Worn in the traditional style, the long Grenadier kilt differs from the sculpts making up the Scottish Line figures who wear the short kilt, work under and hanging beneath the jacket. This feature will make the Scots of this particular period a novelty amongst the ranks on my table-Top.


END NOTE
For me, the absence of the additional Sergeant in the Scots Command packs was telling but if you are going to proceed with converting ensigns, packs of additional halberds, pistols and muskets are available. What I really needed was access to Scots ‘At the ready’ as they are available for the regular British Line but not it seems for the Scots. I had intended to depict my regiment with three firings (platoon system) but have had to resort to only two – not ideal but them’s the breaks. This is a curious and real deficiency on the availability side of what is otherwise a very good looking range of miniatures.