48th Regiment of Foot: Crusader Minatures and a Blue Moon

At long last, I have completed the second half of my 48th regiment of foot for my Quebec refight. At 34 figures, this is the other half for what will be a 70 figure battalion which makes up Wolfe's entire second line on the Plains of Abraham. As this half includes both colour party and grenadiers, they are arrayed pretty well how the regiment will look when based - but will be twice as wide. For a glimpse of the first half I painted this year, see my posting Crusader Miniatures: Supplemental Review on this blog. 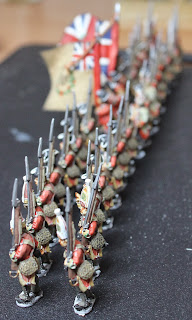 This is the second last unit (prediction) I will achieve this year before packing my bongos and heading for home in the new year. Tonga has been good to me but I have other fish to fry. Divorce, a new home, child care, financial settlement, a new position and a new relationship all loom large BUT I am keen also to get stuck in to my wargaming projects which have languished. Whilst I only managed to add one regiment to the Quebec project this year, it's as big as two or three front line regiments and I am near to 50% done. 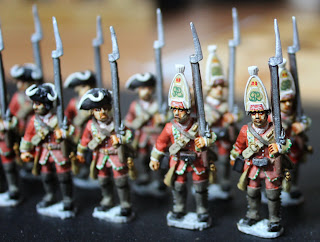 In the beginning, few grenadier models took my fancy and Crusader had yet to include their British or French grenadier figures. I had anticipated constructing my own. Was I glad they came out with a range just in time for me? I think they are superb. 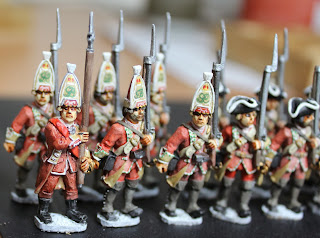 I converted an officer to one of grenadiers as well as a sergeant figure - both very easily achieved with a neat head-swap, pinned and fixed with Supa glue, the glue being all the filler required as it happened. In the Front Rank approach, Crusader provides a blank mitre - so just add your own detail. 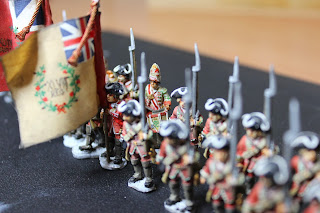 The drummers are an improvement on the Redoubt Miniatures rendition but I have to say none of my reasonable collection of references provide for the back of the coats - forcing some improvisation for how I painted them. 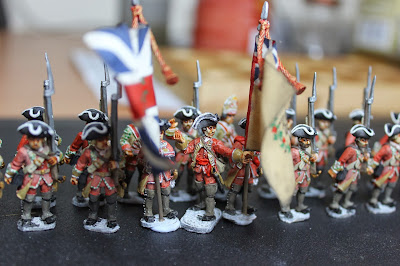 My Lieutenant Colonel Burton is a slightly converted Blue Moon figure. The Flags are by me - I'll always make my own but the ferrules and tassels are Front Rank. Again, this series of photos was taken with my Canon SLR with a macro lens with various settings and no flash under lamp light in the daytime.
Email Post
Labels: British Quebec SYW