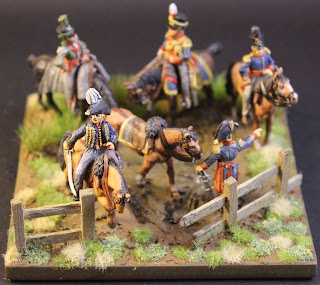 Well not before time, here is my first posting for 2017 - my latesr command vignette for the Papelotte/Waterloo project ... one of too many. I present William Prince of Orange.

If others like me have one blind spot in building their armies, then allow me to confess mine - the Command stands. I normally start with infantry and after a brigades worth I move on to cavalry, then artillery and at the end it's the generals. Black Powder rules somewhat force my hand insomuch as they are integral to everything and I have had to move on them for my 100 Days Allied army earlier than usual. So I have now moved to complete my Prince William of Orange command stand - my Corps commander. 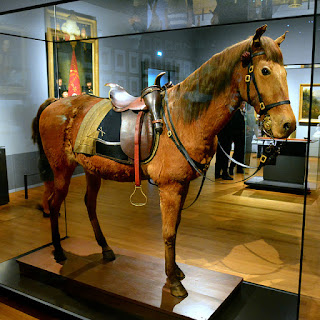 Keyser's painting above from 1846 depicts the Prince on a grey but it seems more likely he was mounted on the day atop Waxy, who was later killed in action and is immortalized through the craft of taxidermy and resides forevermore at the Rijksmuseum (pictured left). Thus my depiction using Perry's figure is on a bay 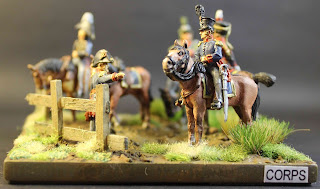 I have elected to depict the Prince with Jean Victor de Constant Rebecque, accompanied by three ADCs: Lieutenant Webster, Ernst Otto Baron Tripp and an unnamed Netherlands Staff Officer. The two ADC 'personalities' are depicted in their originating regimental uniforms, thus we have one mounted 60th Rifles Lieutenant Colonel and a Lieutenant of the 9th Light Dragoons. The Staff Officer has a mixture of the old 1813 uniform (gold lace and epaulettes) with grey overalls. My basing convention allows for five figures for my Corps Commander base. I chose this group as they make the most colourful bunch. 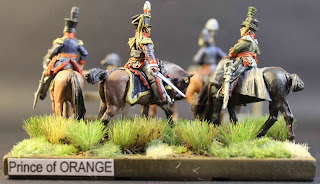 Otto Ernest Gelder Trip Baron Tripp was a Major of the 60th Rifles from 10 November 1813 and veteran of the Peninsular campaign. He was brevetted Lieutentnt Colonel and as he was on the Staff would have been uniformed at his brevettend rank. At the time of the 100 Days campaign, the 60th Rifles were eight battalions strong but none were present for Waterloo. He was 41 years of age and did not survive long after Waterloo: he died of unrecorded causes in 1816. 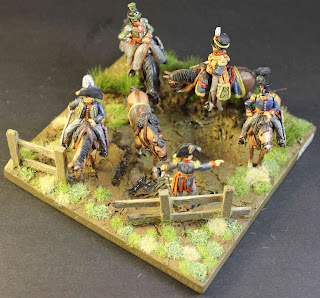 ADC to the Prince was Lieutenant (later to become Lieutenant-Colonel) Sir Henry Vassall Webster, a Knight of Wilhelm and veteran of Portugal, Spain, France and the Netherlands campaigns. He had been a Lieutenant of the 9th Light Dragoons (British) and had stayed on in the Peninsular after the regiment was shipped home in 1814 as ADC to Brigadier Ballard Long - the duties for which he was to render the Prince at Waterloo. 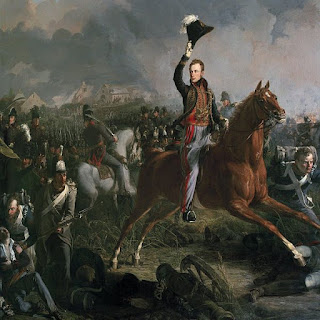 Based on 5 millimeter MDF, this command stand has my Rebecque on foot at a boundary fence directing movements to the Staff Officer whilst the Prince scans for the French. The two ADCs are conversing with each other in the meantime - in English of course as neither has any Dutch and can't follow Rebecque's or the Prince's strategy. The ground is sodden and the previously breached fence-line divides a grazed pasture from a fallow field - the breach being caused by troopers the night before prizing apart a section for their feeble fire in the overnight downpour. 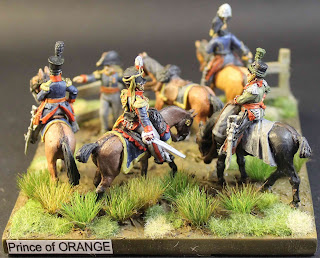 A regimental chronicle and list of officers of the 60th, or the King's Royal Rifle Corps, formerly the 62nd, or the Royal American Regiment of Foot by Wallace, Nesbit Willoughby, 1839-1931 Published 1879.