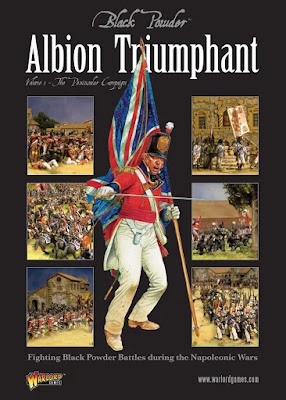 Day three of my quarantine and I capitalised on my spare time by taking advantage of the GBP7.50 deal on the Black Powder supplements PDF, purchasing the Albion Triumphant editions for the Iberian Peninsular and the 100 Days campaign of 1815.

If you are interested in this review and are reading through then I need to caution that this will be a critical analysis. I'll qualify this approach by stating up-front that any work such as this is to be generally applauded and I recognise the effort and overall value of the author and the other contributors to the hobby.

Clearly, the following is from my perspectives and the comments are opinions and are my own. Are you ready?

This edition was written by Adrian McWalter, published in 2016 (so hardly hot off the press for my review) and clearly still in publication and available through Warlord Games distribution. The PDF is 116 pages and contained a historical background, a series of select battle descriptions with paraphrased orders of battle (ORBATs); a national army characteristics section including unit descriptions with ratings and special rules; some scenarios to re-fight the campaigns on the table-top; and, army lists with statistic summary charts.

Albion Triumphant, if the title wasn't a big enough hint tends toward British triumphalism. It includes a lot of romantic language and many of the most famous quotes and cliches from the period. It is clearly written by a Brit, primarily for a British audience which to my mind is a flawed approach given the reach of wargaming globally. I certainly don't intend to argue Mr McWalter's position on anything - after all, Britian was a chief protagonist throughout the Revolutionary and Napoleonic wars and one of the principle victors. Nevertheless, if this is ever re-edited, it might benefit from being toned down a little.

Now I recognise that the style is deliberately 'up-beat' and designed to inform in a punchy, light-hearted way within the construct of a game. I get it, but the adjectives used throughout unbalance the narrative and comments such as 'Huzzah for Albion!' fall a little flat if you aren't British. Anyway, a re-edit is just a suggestion and I understand if my British friends don't see it.

I don't know if the first 15 pages of historical narrative overview of the wars is a good thing or not. If you are new to Napoleonic wargaming or the Peninsular campaigns then it is likely a useful introduction? I imagine there are gamers who start with a rule set and then go on to research? For people like me who have been wargaming for over 40 years (and I'm in my mid fifties) it's the historical reading that leads to wargaming, so I'm usually well grounded before looking at rules and figures. If (like me) you are well-read up on the period, then this supplement could have been at least 15 pages lighter. If I wanted a history of the campaigns I'd look to Sir Charles Oman or the Osprey Campaign series which provide a far more expert deep-dive.

Following the historical overview, there follows a series of battle narratives with maps and ORBATs for Vimiero (1808), Talavera (1809), Fuentes de Onoro (1811) and Salamanca (1812). This is my least favourite feature of this edition and I observe that the ORBATS are all but useless and unhelpful to me. Often only the Brigade commanders are listed - the regiments and their strengths are absent entirely. Given the pre and post-battle records for this particular period and these campaigns I regard this as a glaring omission. Admittedly, I have the entire works of Sir Charles Oman which includes casualty lists but Phillip Haythornthwaite and Michael Chappell's Uniforms of the Peninsular War 1807-1814 contains far more useful ORBATs and in a far more succinct layout. At 20 pages, this select list could also have been left out.

At page 35 the supplement gets to the national army compositions (British, Portuguese, Spanish and French) which is where the real meat lies. An organisational overview is included for each and includes tactics and doctrine with Black Powder Special Rules for armies and even individual units and unit types. Across all nationalities this is the best and most valuable feature. This is really why I bought the supplement and why it's worth the asking price - especially at GBP7.50.

I'd like to applaud the rules philosophy stated by Adrian McWalter which is consistent with the Black Powder approach. He communicates his special rules suggestions with the comment, they 'work for me and the gaming group I am in', emphasizing that 'Black Powder is a flexible game and whether you use them or invent your own is entirely up to you.' I have always admired this sentiment and think it deserves particular recognition.

On that note, I'm not going to dissect each and every Special Rule or the attributes given to any specific unit. Maybe you'll agree with them and maybe you wont. I would have preferred some more considered reasoning or explanations behind the attributes ascribed. For example, British Guard Infantry (page 40) are given Stamina 4 and Elite 3+ Special Rule with no justification supplied - so, let's take a closer look at this example.

The Guards had very little battle experience at the start of the Peninsular campaigns in 1808. I accept that they would have had elevated morale as they'd have been talking themselves and each other up being Guards (that's what Guards do) and the expectations of Royal Guards tend to impact on a unit's elan. By the end of the war I imagine them to have been genuinely crack, veteran troops as they had gained so much hard fought battle experience. Successive victories must have made them feel near invincible by 1814. For these reasons I'd keep their Morale rating at the constant 3. I would have liked to have seen a graduated Elite special value ascribed over time - say starting at 5 or even 6+ (the worst) and 2+ by 1814. I don't necessarily see why they should start the campaigns with shooting values of 4 and similarly might start them with the regular 3. The stamina of 4 can be easily justified as they were often fielded at near full strength of 1000 all ranks - these were big battalions and in Black Powder terms they were large units who would have stamina of 4. But this is not discussed in the supplement.

Instead, included in the preamble there is a rather thin and pointless uniform description which could never hope to be used as a painting guide - so why include it at all? This is a real design flaw for this supplement as far as I can see and pads the whole volume out whilst adding next to no value. It is a repeated feature throughout the national army descriptions. If I were to black-line redact the superfluous text for me, I believe I could get this volume down to about 30 pages of genuinely useful information.

The volume is definitely shot through with beautiful photography which follows a strong trend over the past twenty years in wargames publications. For me; however, they barely serve as inspiration and are largely a waste of paper (or in my case bits and bytes). The Photoshop techniques smear the models into artistic montages but I'd personally prefer to see how the models look in a real life wargame if they must be included at all - you may not agree. I haven't bothered calculating the space taken up with these images but this sort of padding also makes the volume far less handy as a reference guide when gaming. You'll have far more pages to flick through when trying to get to the needed content.

I intend to edit my PDF down to the bare essentials to maximise it's usefulness. Whilst generally conforming 90%+ of rules content, I do not slavishly follow rule sets like doctrine so I will look critically at what features I use and what I alter. Provided the gamer you play with agrees before hand, you alter what you like as Mr McWalter suggests and see how your version of Black Powder works. You can make necessary alterations in subsequent games.

I do really like the particular Commanders section (3 pages) with individual attributes discussed and then rated. I also really like all of the Special Rules additions with special mention of the Gallop at Anything cavalry rule - love it. There can be no doubting the experience Adrian McWalter has in this specific wargaming period and theatre of operations.

At GBP7.50 this PDF copy of Albion Triumphant is worth the purchase price, or certainly will be once I'm done editing it down. If you paid a full price for the hard copy version I'm not nearly so sure I would say the same.