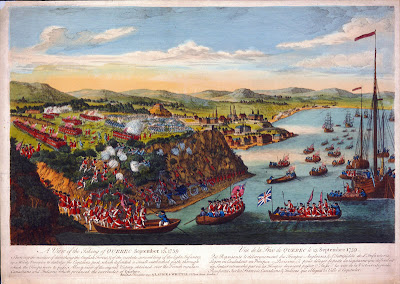 Inevitably, I am have commenced the pre-production phase of a new wargames project: the battle on the Plains of Abraham 1759, prelude to the fall of Quebec. I am not going to include a precis of this battle on the blog as there's more than enough material on the web covering that well known historical narrative - wiki always being a useful place to start. Speaking of starts, I thought I'd lead off with the above image which is an operational depiction over an extended timeline running right to left. Whilst most battlefield depictions take a 'snap shot' in time and perspective, this is a narrative account. No doubt there is a term for this sort of work but I am no art historian so if anyone can help here, please comment.

So, why Quebec? Apart from 'why not?', it's because it is one of those momentous events in history where a battle determined the immediate future of a country - Canada. Whilst the war lasted a while longer, Canada was passing into the British empire. It is a battle of particular drama as both sides had everything to lose and all to gain. The British assault was a high risk operation. The forces were evenly matched and the result was the death of both opposing generals - Wolfe on the field and Montcalm of his wounds soon after. Both unlucky generals and high drama indeed.﻿

﻿
﻿
﻿﻿﻿In reality, this was a battle I was always going to wargame. From the age of five back in the 60s I had those plastic soldiers with removable bodies, heads and weapons. I never looked back. I spent three years in England from the age of six and all my friends were into soldiers. I wonder if they still are. My school had four sporting houses named after famous Englishmen: Livingston, Scott, Clive and Wolfe. The story of Quebec has been with me ever since. When in Canada, my parents simply had to take me to the city, battle field and museum - it was just easier. The only real surprise in this project is that I've waited so many years before embarking on it.﻿﻿﻿﻿﻿

﻿
﻿﻿﻿Whilst my good mate Matt already has the jump on me with his French﻿﻿ collection, I will nevertheless be completing both sides. As his British are based around the Ticonderoga campaign, I will start with them but will switch between armies. The figure scale in this project will be my constant 28mm preference and I have poured over the internet and discussed figure manufacturing options with fellow gamers on TMP (The Miniatures Page). I will be collecting from Redoubt, Front Rank, Conquest and Old Glory. Also, a new Australian Manufacturer, Drunken Grenadier, will be making French and British for my period.﻿﻿
﻿ ﻿
﻿﻿Also, I am endeavouring to do something a little different than what I have seen in the hobby. I am adopting the BAR rule set (Battles of the Anciene Regime) which is squarely aimed at the big battalions theory or wargaming. It focuses more attention on battalion movement and deployment by division (sub-set within a battalion) which I find more reminiscent of the period and suitable for what was largely a European and linear style of battle. Using the largest unit representation in the rules (60 figure French battalion) I have divided this into the official (paper) strength of French battalions serving in Canada (557 all ranks) to arrive at a representative scale of 1: 9.2. Whilst most would suggest going to a round 1:10, I have a calculator and the extra few figures might come in handy. I'll certainly be able to play with anyone else in the future and just shed figures depending upon rules and ORBATs.
﻿﻿
﻿﻿

I also have every intention of sculpting a few figures of my own, probably starting with characters. With famous and much illustrated commanders such as Levi, Bougainville, Montcalm, Wolfe, Townsend and Howe I am surprised at the lack of representation and the standard on offer and will attempt to cover the gap. This project is neither deadlined or urgent and overlaps with my Project Lewes. If I can have at least one brigade completed by the end of the year I shall be pleased enough. Whilst I am yet to place my first order, I have developed a comprehensive ORBAT and army list for the British, the first version to be uploaded as a pdf shortly. ﻿﻿﻿﻿﻿﻿﻿﻿
﻿﻿﻿﻿﻿﻿
Posted by Unlucky General at 1:09 PM