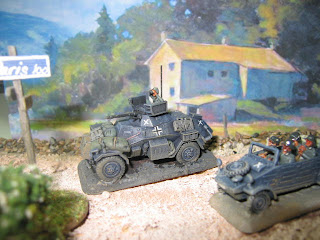 Largely because it's been a while since posting and becasue I realised there is nothing pictorial on my blog to support my Rapid Fire tables postings, I finally followed through on an idea I've had for photographing my models. I've never bothered with back-drops before so I surfed the web, downloaded, printed off and mounted a few images to accompany my armoured and reconnaisance elements for my Wehrmacht 1940 army. 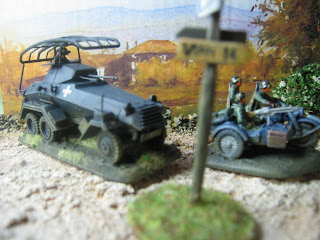 The great thing about this exercise is that my back-drop images are only the width of a portrait oriented A4 sheet and I did this in no time at all on my work table. Anyone interested in this sort of thing needs to keep the flash off their camera but with plenty of yellow light, preferable natural. I have a Canon PowerShot S70 and just set it to 'close-up', hold it steady and away I go. 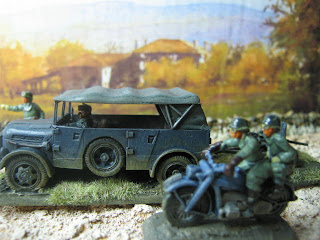 This is certainly about as close up as I want to go for my 20mm efforts and I'm sure many would agree that different scales and paint jobs for that matter don't warrant too close a shot to highlight all the imperfections. After all, these aren't creations aimed at competetive modelling. They are built for wargaming. The first few backgrounds are from watercolours. 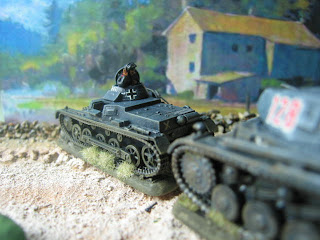 At times you can see the creases in the corrugated cardboard I mounted the prints on. The angle of the lighting should overcome this feature if it bothers you. I haven't bothered with many foreground items as I can't remember how to pre-designate my focus - something for next time perhaps.  These pictures are only the ones which turned out - plenty didn't. 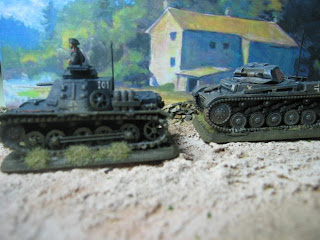 The models are a couple of years old, some being renovated older efforts from my teenage years. They represent old Esci kits (Pz II's), Skytrex (Bfz I), Airfix (Pz IV), HaT motorcylists and even an old Matchbox kit.  Most of my elements are for Guderian's division but I have one company of Pz 38T's from Rommel's to mix it up a little - had to have them. 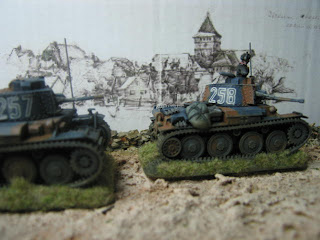 As you can see, I also used some sketch back-drops which I think work quite well. It is not my intention to represent models to trick the eye and pass themselves off as real life. Rather, I think it adds a little context and all of the images used here as of France. For me, the sketch back-drop helps draw the eye to the model and I think I might even prefer it. I did not use colour photographs this time. 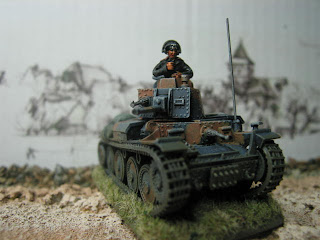 As you may have noticed. I tend to festoon my vehicles with plenty of campaign baggage. I also prefer to have aerials when I can (steel wire cut as high as my storage cases will allow) and tend to give my command vehicles for each company some externally visible crew - either SHQ,  A&B or Eureka miniatures. It reminds me tanks are man operated machines, not robots. 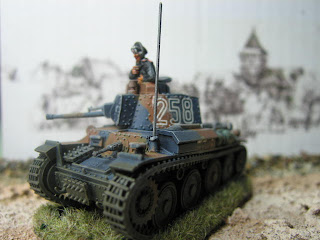 These days I represent my open topped vehicles such as Kubelwagons in two versions: fully crewed and empty for when my units alight. I also still paint everything by brush - not owning a sray gun nor familiar with how to use one. This is something I will remedy this year. To date, if an edge needs to be 'smudged' I use a tiny piece of synthetic sponge with needle nosed tweezers and dab. 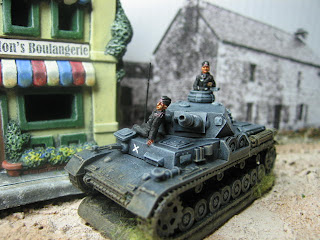 This last image uses a black and white photo with poor resolution and still works I think. My additional scenic effect is a plaster house bought for $1.00 years back in one of those bargain shops. With some, filing, sanding, painting and prodigous quantities of sealant I hope I turned it into a convincing French bakery.
Email Post
Labels: German Wehrmacht WWII