Variation on a theme 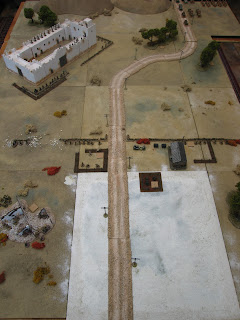 It's been years since I began playing Rapid Fire 20mm WWII wargames and over a year since my last bash so, over this Canberra Wargames Convention (CANCON) weekend my old school mate Grant and I decided to finally have a crack at an imaginary scenario based on the Gallabat game within the original rule set. Our was set around a similar desert fort somewhere in Cyrenaica. Played on an 8' by 5' table, the main features were a road running it's length, across a salt pan (salt marsh) and bisecting a low dry stone wall (replacing the dry river bed in the Gallabat game). A couple of strong points were in place behind the wall, as was a ruin, with the main feature, the fort, in front. Behind the fort were some steep hills and the main road exit, the direction from which the British assault was to commence. 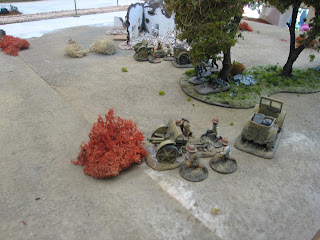 In defence, set up anywhere on the table, were: 1 x battalion Colonials (Askari's - elite morale but militia fire effect); 1 x battalion Regulars (militia troops); half battalion of Black Shirts (elite morale, regular fire effect); 2 x 65mm canone. In reserve was a three tank company of CV33 (machine gun tanks) and two sorties of CR32/42 providing air support. Italian mission: hold. Complete victory if they drove off the attack and a partial victory if all else failed, they still held the fort (undisputed). Game duration was 15 turns and I, the unluckiest of generals, took command of that defence.
Grant, commanding the attack had: 1 x battalion of regular British motorised infantry; 1 battalion of Indian regular infantry (no transport); 2 x antiquated 18 pounders; a mixed company of 2 Vickers VI tanks and 1 x Matilda II; a company of 2 x Humber Light Reconnaisance cars and one sortie of a Kityhawk. Mission: drive off the Italians or secure the fort as a partial victory after 15 turns. 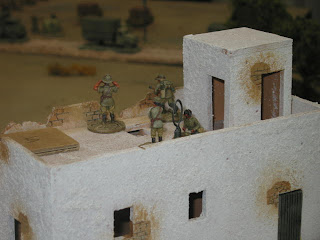 I used selected carboard squares with pre-designated numbers for some concealed elements, including four dummies to aid the fog of war and attempted to bluff the British. Two bluffs were placed amongst the scrub trees in road's bend to slow the advance and another two clearly visible in the fort courtyard to deceive Grant into thinking the fort was better protected than it was. They are removed whenever I open fire, break cover or was acquired by the Brits. 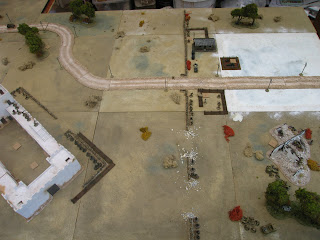 Grant pushed everything down the road and, once discovering the first bluff, gambled on the other scrub tree counter also being a bluff (rightly) embussed his motorised infantry just round the bend and deployed his guns to the rear and began opening up on anything he could see. As soon as I saw this was more than a probe, I radioed for the planes. 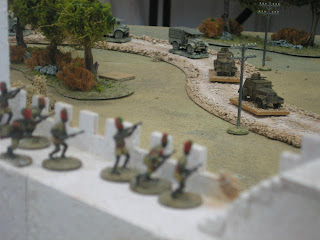 To allow for breakdowns and difficulties in desert tank mobilisation, each tank was diced for to arrive (failing on a 1 or 2 on a d6). Further, in line with the Gallabat scenario, we shedded tracks on a roll of 1 each turn a tank moved. Whilst staggered, all three British tanks were soon on and just as soon began shredding tracks. I think it's fair to say at no stage in the game were all three running simultaneously - their accompanying recovery vehicle in constant use. 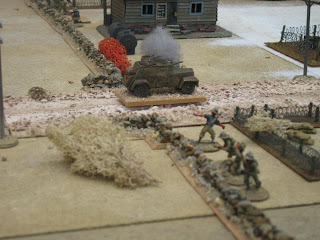 Holding my fire, stalling for time, I kept concealed, encouraging Grant to push his scouts as fast and as hard as he could down the road. At the wall, a concealed Anti-tank rifle opened up, giving away his position and perhaps predictably shot wide. Imitating history; however, one of the 65mm canone's fired over open sights, stopping the rush dead. The drivers failed their morale check, the rear vehicle high-tailing it and the forward crew abandoning their car in panic only to be ruthlessly gunned down by the black shirted Fascists. So, it was one-nil to the Italians. 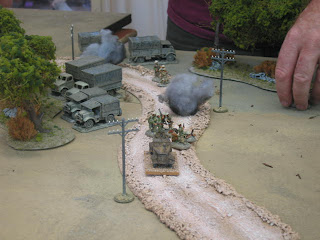 Grant developed his left flank assault when i elected to open up with a concealed machine gun at the stone wall only to remind myself I am no judge of distance and fired to no effect, out of range! I also opened up a barrage with my 65's, manageing to hit several small rocks and scared a jerborah. Meanwhile, the fort garrison kept low. Grant and I realised this was going to be a comedy of errors as most units on the table had never been fielded before (new models always failing in my world). 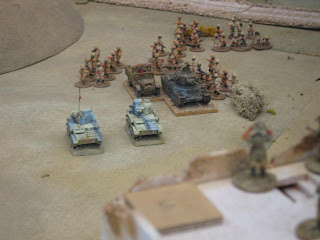 Tying up my ordinance on his open  left flank, the British developed the other prong of his attack as fast as the Matilda could move - very slow as it shedded tracks twice in the game. Nevertheless, the machine guns of all tanks swept the companies holding the forward positions behind a low wall in front of the fort. The pressure was on and the colonial garrison was getting close to a critical morale check. 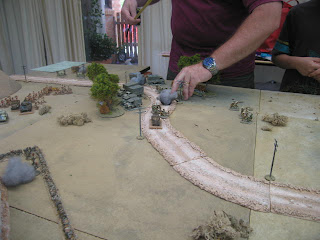 Meanwhile the other British battalion rushed the stone wall, opening up all the way and inflicting many casualties on the black shirts with the aid of the returning Humber. At this stage of the game (thankfully) my CV33s attended (two of them) which, burned up the road, swung around the hard pressed flank and opened up with a withering supporting fire which, combined with the MSVN black shirts and switched fire from the 65's decimated the assault in two turns, the remainder surrendering after an appalling morale roll. 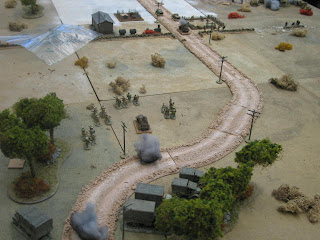 Meantime there was a small air war happening in the skies above. Grant had rolled a three for the number of turns his pre-ordered sortie could hang about for. MY call for help was successful but took four turns to arrive, luckily coinciding with the first turn of the kityhawk. They drove each other off for two turns but the CR32/42 was driven off on the last and the allied air menace strafed and knocked out one of my guns. 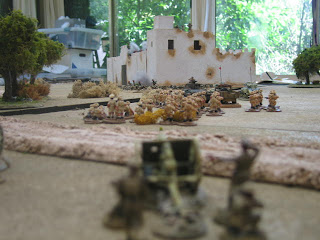 I rolled for five turns and had a second sortie up my sleeve. Returning the next turn, I returned the favour and strafed his entire battery with some exceptional rolling and leaving only one crewman left. Grant never re-crewed his guns, the battery being silenced forever. The game remained in the balance. With the loss of the guns and half the infantry, Grant would have to blow the fort doors with his Matilda or ram them to get in, provided he didn't lose too many men storming the walls. 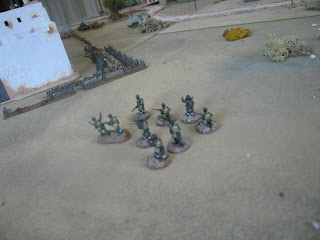 Losing confidence, I broke cover from the dry stone wall with an additional company of regulars, making as fast as they could for the rear gates. Grant had called for a body count of the colonials - they were 14 down, needing only another 6 losses for a morale role. He had lost to much to drive me off completely but the fort was in jeopardy. 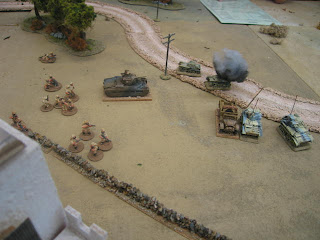 Rushing the CV33s up the road, I then promptly forgot to fire them (after all , it's a social game and been a while since Grant and I gamed together). That cost me as the Matilda heavily damaged one, causing an abandonment and company withdrawal for two subsequent turns. The exchange of fire was furious, my remaining 65 taking out the mobile Vickers VI (the other having shedded at a critical moment). 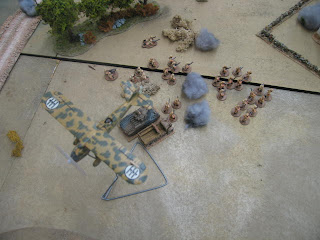 In the end, the British had just taken too many hits and with air supremacy secured, my CR32/42 repeatedly passed over the Indians, all four machine guns blazing. Rolling well, it cut up the advance and yet another poor roll on a second test saw the unit rout and the offensive melt away. At the end of 11 turns, with 4 to spare, the Italians had withstood.
Whilst this scenario is based on Gallabat, in which the British also failed, Grant and I agreed that we had under-compensated for a third British infantry battalion. Replacing them with the two Humbers was, perhaps, too little. We will try it again one day with two separate tank companies - one of two Matildas and the other of the two Vickers mark VI.  On the other hand, the Italians were also short a battalion. With four turns to spare for a partial victory, holding back the infantry and concentrating available ordinance may have yielded better returns. Ah well, such are the fortunes of wargaming.
﻿ 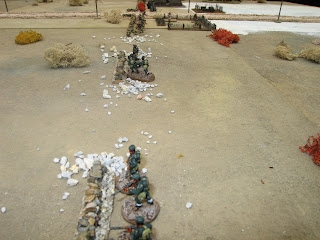