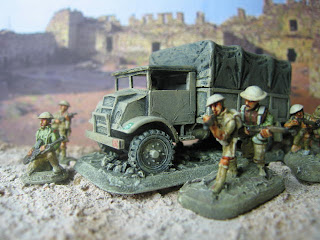 For several years I have been returning to the Western Desert or North African theatre of WWII in 20mm. Rapid Fire but I have never actually wargamed it. No-one in my circle of fellow gamers has had a project co-inciding with this interest leaving my accumulating army rather lopsided and unopposed. To date, I have built three battalions of Italians, with numerous support arms but they have always lacked a foe - until now.

Based on the combined arms groups known as 'Jock Columns', I purchased most of the makings for this battle group years ago, but as experienced wargamers around the world know all too well, shopping and building are two mutually exclusive past times. Not any more ... at least for this mob. The figures are from Raventhorpe who, at my time of purchase was the only company offering greatcoats for early war British infantry. I wanted a unit that was operating in the winter desert between being booted out of Cyrenaica and capable of joining in the counter-offensive 'Operation Compass' later that year in 1940. 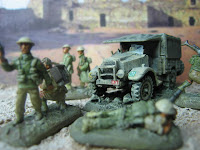 The infantry could no doubt serve me in all other Mediterranean theatres and in North Africa up to the fall of Tripoli. About the only truly consistent uniform item painted by me was the sand coloured helmets. Otherwise, the figures are painted in a mixture of sands, browns and khaki.

I opted for three different vehicle types for motorised transport. I went for the distinctive Canadian Military Pattern (CMP) 3 ton lorry with the No.13 cab (leading photo), the Bedford OY 3 ton lorry and the Morris GS 15cwt (pictured above). All vehicles needed to be in general service at this period and all models are white metal offerings from Skytrex. As usual, I required to refer to images of corresponding lorries to figure out the configuration of these models - assembly details such as where to locate spare tyres was not as obvious to me as it might have been. On this note a request to manufacturers - it you can't include an assembly guide with the model, then a few more shots of completed kits on your websites would be invaluable.
All vehicles are marked up for 7th armoured division with the original jerbora field sign, original base bridge plates (yellow circles with weight classification) and have the designation numerals '61' on a green field sign for the first motorised infantry battalion for the division - or is that the second? All markings are hand painted and I located them variously across and between the three vehicle types.
The following image is the assembled cast - a little reminiscent of the original Rapid Fire photos within the first rule set. I have based most of my figures in pairs for ease of movement but in a fore and aft alignment like fighting pairs - fire and movement being the idea. The ruin in the background is scratch built and there is an entire composite desert fort I have also scratch built which can be adapted for a small or medium sized structure. 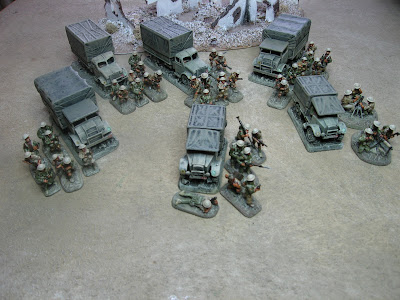 Posted by Unlucky General at 10:35 PM