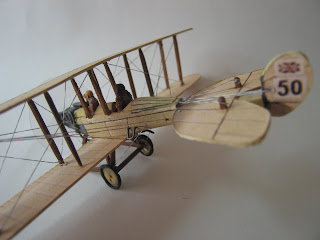 It all over - essentially. As you can see, I have finished rigging by Be2a (one of them) and mighty relieved I am I confess. The rigging line is a twisted metallic coloured rayon thread which certainly gives the impression of twisted wire - perhaps a bit to stripey - I'm still undecided. 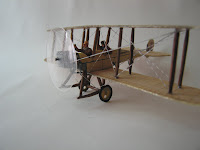 This model is the one where I made the wheels myself as well as the skid rails. The prop-head is just a dress making pin but serves well enough as they had no spinners and were minimal in size. The wiring was fiddly, though I should be getting used to it. It's actually one of those pain points that I keep putting off. 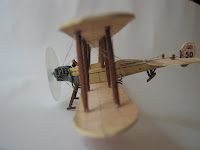 Pleased to say that no struts gave out in the rigging process which is always a possibility when under strain. Now for a few admissions. The guides on the tail plain should also be underneath - not just on top - and if I did this again (which I doubt very much) I'd make a penetrating peg with receiving holes to tie through, top and bottom. 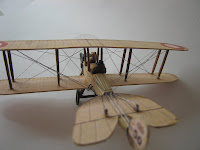 I suppose this is why I am a model maker only as far as wargaming directs me. If I were a modeller proper, my Be2a's would be far more precise but as it is, I'm only after a reasonable representation - which I have probably stated before. Even as I write this I realise I haven't yet put my stabilizer skids underneath the wing tips - on to that shortly. 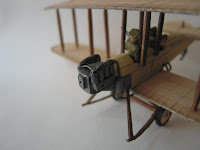 I am extremely satisfied with the engines - I had no idea how that would work, being a first effort. I ended up not weathering or dirtying the airframes. I have spent long enough and certainly blogged enough on this build already. Whilst satisfied, I'm glad it's finished. It's certainly been worthwhile as I now have two airframes which to date are rarely seen over the table-top. 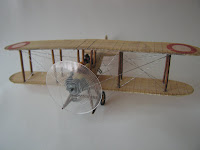 Together with my Avro 504 I now have the aeroplanes which were used in the TV Series Wings and therefore have essentially covered the early war standard airframes for the British in WWI. During the last two months I have also obtained a Revell De Havilland DH2 which I am going to need if I'm to campaign in this specific period. 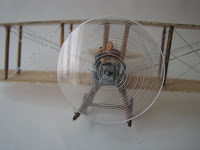 I have also bought a Fokker EIII to partner up with my Pfalz EIV so I can field both sides in a few scenarios at home if a random game should be needed. For the time being; however, I have to say goodbye to WWI aviation modelling as my Airfix 25pdr and Quad models have turned up and that's another build which requires completion. If it weren't for blogging, I'd never have the motivation to get anything done.
Posted by Unlucky General at 6:03 PM