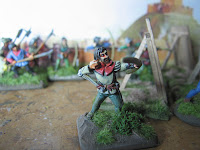 I have today finally motivated myself to complete a relatively minor but long standing task ﻿which has been cluttering up my work space for months. I designed and built a series of pavises to enable my fortifications to be attacked with some chance of success - or at least to provide the assault with some cover from comparative safety. 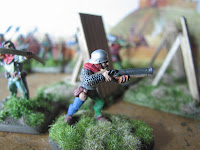 I had originally designed them with two props or A-frames but then thought better of it. After all, with a central prop the cover may be easily accessed by two archers, crossbowmen of hand gunners from either side. The house rule for their effectiveness will necessitate a roll of 6 on 1d6 using Warhammer Ancient Battles rules to hit any figure in base to base contact with the pavise, the figure assumed to be utilising the cover provided. 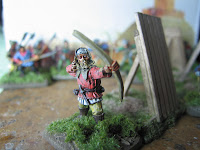 The pavises are hand made from balsa, assembled using PVA white glue. They are glued to the balsa bases (unusual for me) using Selley's Liquid Nails. The planking effect to the front is achieved with a 2B pencil on a thin sheet of 2 millimetre balsa - the rest is cut from 3 millimetre balsa strip. I painted in in Humbrol enamels (as usual) being a mix of matt black and wood, well diluted with mineral turpentine. 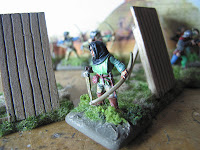 I didn't bother texturing the bases with pre-mixed putty this time: I didn't even undercoat them. I just flocked it using my own series of blended static grasses and then covered the edges with Humbrol Khaki Drab to cover any gaps. The photographs this time includes some of my woodsmen archers (as I refer to them) from the Old Glory Wars of the Roses range and one of my five hand-gunners from Mirliton Miniatures. 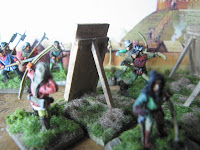