As I was happily fiddling with a couple of new British battalions for my 1810 Peninsular army, I was listening to a new favourite series of podcasts by the gang from Wargames Soldiers and Strategy - see the link here: http://thehistorynetwork.org/wss51-favourite-game-mechanics/ 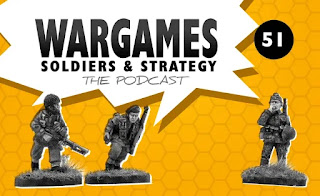 If you follow and listen they were discussing the range of new game mechanisms and musing about if the turn based sequence of games (like Chess) are a relic of the past? What do you think?

I've watched every YouTube broadcast by the trio from TooFat Lardies and they certainly champion randomised unit activation through a moderated card-drawing system with a turn ending card sorted in the deck. In such a system it is possible (albeit unlikely) that variable turns can follow on from one another without some units ever activating and getting into play. It strikes me as a very randomised game.

I'm less familiar with other systems such as Bolt Action but I understand they have a parallel concept in play and other games are also diverging from the I-Go-U-Go tradition. From discussions I have heard on WSS as well as by TooFatLardies themselves, the traditional turn based systems have few supporters. The fellas at LittleWarsTV seem to rate games using it down - that might be more of my impression that fact and likely opinions may even differ within that club.

This has caused me to think about the games I play and I have to admit they are all firmly rooted in the turn-taking tradition. BUT, here a few things to consider in their defence.

Fundamentally, there's nothing wrong with taking turns and as far as getting a fair or an even crack of the whip, I-GO-U-GO games are very even handed. I personally get no satisfaction in attributing my loss in a game purely to a lack of luck. I like to think my poor judgement and lack of generalship might have had something to do with it. Whether I'm winning or losing, I enjoy getting a reasonable amount of time to actively play what is a game after all. A system which could relegate me to a passive onlooker as my opponent rolls up my front (through dint of fortune) with no chance of response tempts me not at all.

Following on from good or bad fortune - how much luck do I want in my games? I play Black Powder and Hail Caesar which require successful command rolls in your turn (I-GO-U-GO) which if failed, stalls movement of units falling under the command roll for the rest of that turn. I have to roll for fire effect, roll for morale saves (saving throws for wounding) and roll for close combat effect and melee resolution. From what I can see, there's plenty of dice-rolling which, whilst modified, provides considerable scope for luck.

Whilst we have devised no more complex a system than flipping a coin each round of turns, Grant and I do prefer to change up the strict order of play within the I-GO-U-GO concept. Each new turn or bound, we see who wins the initiative for the next round (that's his turn and mine combined). This way, whilst across any given game we will have the same number of turns each, there may me periods where one of us gets to take two turns back-to-back  when one of us goes second one turn then wins initiative and takes the first turn in the next round. We find this periodic potential advantage can make a difference and is the highest random turn influence we desire.

The chances are you will be more familiar with more rules sets than I, but I do wonder if these new turn randomising systems are best suited to skirmish level games.  They certainly seem to be coinciding with their rise in popularity. I just wonder if larger scale games representing larger bodies of soldiery might not tend to iron out smaller scale random events as smaller scale combats get absorbed within the ebb and flow of the grander battle? It's just an idea.

The concept of battlefield friction is something oft discussed and pursued by TooFatLardies in their games. Whether this is the exigencies or war, fog-of-war or again, the randomness of events I've always felt there's nothing good game scenarios can't achieve. I'm not at all convinced I need new rules mechanisms to attain this ethereal quality in a game. Whether we use a scenario to introduce divergent concepts in a game or not, our 'tired-old' turn based games have never given us a predictable result that I can think of. Fortunes forever swing this way and that. Perhaps we don't play enough? Quite possible.