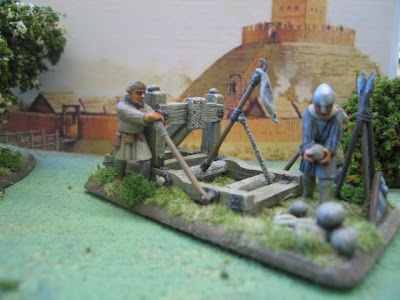 I've had these models unbuilt for some time and fancying a break from painting mid-thirteenth century soldiers (Project Lewes Blog) I thought I'd step back in time a couple of hundred years. Those familiar with this site will know I've built half of the original royal castle at York (28mm scale) but there's little point have a dirty great motte and bailey defence without some artillery to siege it ... so here are the first two items for the artillery park. 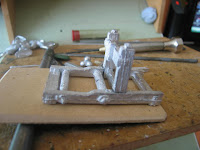 They are both Gripping Beast catapult models and I have to say they are beautifully sculpted and thoughtfully modelled. Having said that, it required all of my medieval catapult references to figure what the parts were and how they went together. Why, oh why do white metal models rarely ever come with instructions? 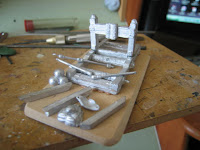 The base is a basic box frame with the windlass fixed as part of the casting. The principle upright is a similar box frame complete with cushion to take the throwing arm and both of these two main section fit well together with a minimum of filing and make for a sturdy model. I fixed my base section to a 3mm MDF base from the start, building the model as one piece. 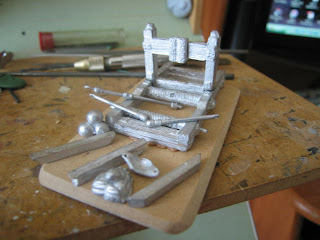 As you can see, there are three more supports, forming a series of A-frames to the front of the mechanism. It comes with the throwing arm, with a hook and alternate slings; two levers for the windlass; a rigid rope fixing the arm to the windlass; and, two bags of stone shot. I fixed the main frame with Araldite and used Supa Glue for the rest. 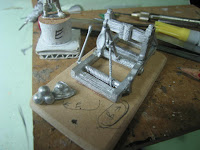 The three man crew are well sculpted, two being posed to operate the windlass and one carrying shot.  When building this model, be sure to pose your figures where yo want them and fix the levers to fit into the hands of the receiving figures when placed. As you can see, I marked and labelled the position for each figures, posing the set before completion. 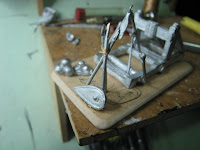 I use WAB for my medieval wargames  and provided I have an 'Artillerist' hero (character figure) with my 'battery', anyone can man the machine. Therefore, my crew are fixed to the model and cannot flee. As you can see, I strung a few spare spears and a shield to flesh out the vignette, so you can see, my crew will stay and fight! 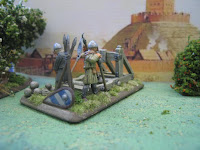 I have only two catapults but if I ever make another for my Normans, I will alter the model to reflect a different stage in shooting. These come cast in a half wound back state. At some stage I'll give them a wicker wall for protection but in the meantime they'll have to rely on their range to keep them out of bow-shot. 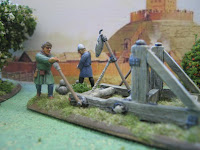 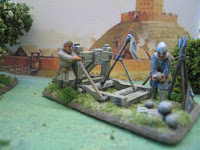 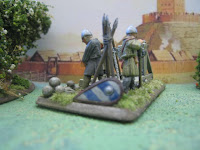 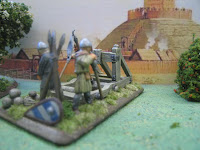 Posted by Unlucky General at 4:53 PM