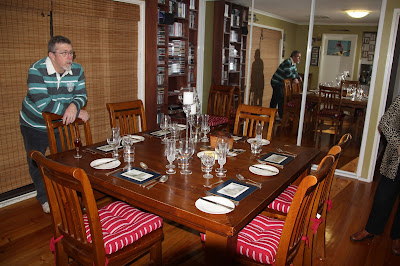 Today, 200 years ago the Emperor Napoleon issued his last pre-battle bulletin and tomorrow, the Armee du Nord pushed off into Belgium. The anniversary of the next three battles concludes this coming Thursday with Waterloo but I held my remembrance dinner last night being the last weekend before the main event. As I live in Australia, it hasn't proved possible for me to attend the event itself so I took it upon myself to hold a small soiree down-under. I am handy enough in the kitchen and took Friday off work to shop and prepare.

It was a candle-lit dinner for six centered around my great friends Grant (pictured above) and Stu with whom I accompanied to Waterloo in 2012, Stu's wife Wendy, my Mother and my lady Julia. By the end of a very long but highly enjoyable evening, we demolished two bottles and one magnum of French Champagne, four bottles of red, four bottles of white, a rose and a good quantity of sherry and calvados.

Unlike an army of social media enthusiasts, I do not photograph food - I have to draw a line somewhere. Even if I say so myself, the Beef Wellington (my first) was a great success, as was the Beetenbarsch and the image below was taken before sweets. Oh, and yes if you were wondering ... we have all been taking today very slowly after a late start. 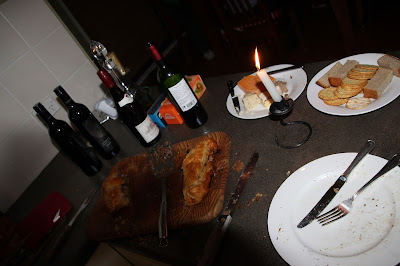 Posted by Unlucky General at 1:39 AM