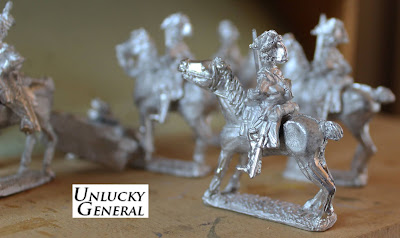 I'm going into a bit of a deep-dive on my cavalry considerations for expanding my 28mm Spanish Peninsular army for 1810. This is why reading can be so dangerous for the compulsive wargamer. After reading several references on British cavalry (specifically their heavy cavalry) I concluded that I needed a second heavy dragoon regiment to make a heavy brigade.

I want them to look different from my existing 4th Dragoon regiment (also Elite Miniatures). After recklessly browsing Nathan's Elite Miniatures Australia website (beautifully re-built by the way) I discovered they also did their troopers in a watering cap (shako). Bingo! So, before I let my better self regain control, I ordered 24 horses and cavalry figures with a 50/50 mix of watering cap and bicorne.

First let me balance my support for the Elite sculpts by saying I am not as big a fan of their cavalry as I am of their infantry and artillery. One of the draw-backs is that there is only one pose of rank & file trooper - that of a long stirrup pose with sword arm fully extended. Elite Miniatures also use a rigid alloy which, whilst great for their multi-posed infantry with bayonets remains resistant to manipulation. I like to diversify the look of figures in a unit and whilst I know how to twist heads on these figures, it's a risky business.

I believe that the best looking dragoon figures on the market today are those offered by Perry Miniatures. It would have cost me GBP93.16 which converts to AUD175.00. Whilst I can afford that, it's still on the high side for one regiment and I can't imagine my UK friends paying 175.00 in pounds sterling. The same number of mounted figures from Elite Miniatures Australia sits just under AUD100.00 which I'm sure those of you who appreciate thrift, is quite the bargain. I also know the proprietor Nathan (bloody top bloke) and I get to support a small Australian business into the bargain.

The payback really comes in the preparatory work I need to do to make an accurate looking (I hope) regiment of British dragoons - or in this case, Dragoon Guards. Firstly, the Elite horses are all sculpted with substantial and full tails. I needed to crop mine. This is no small exercise as there is a fair chunk if integral metal to remove and on some poses, the tail splays across the rear quarters and takes some careful and diligent removal. 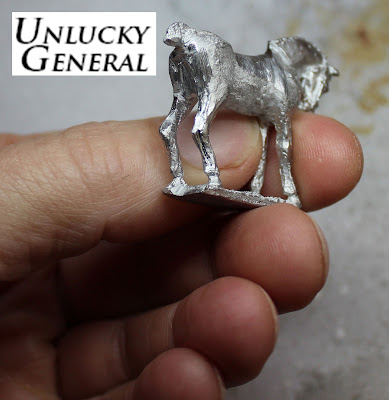 In this conversion a Dremel tool is your best friend. I started by snipping as much off as I could with cutting pliers, then turned to the Dremel disc cutter before shifting to the sander and finished off with my scalpels and some hand files. I'm doing this unit in two bursts - two six figures squadrons each time. Even just doing twelve mounted figures took a good while. 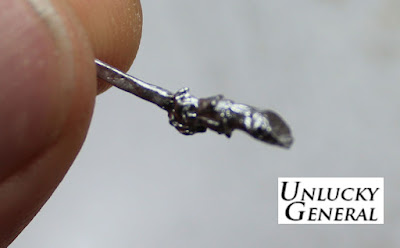 I elected to depict my regiment in two demi-squadrons - two squadrons at the gallop and these first two squadrons at rest. Whilst Elite provides a range of posed horses at rest, as mentioned before, the troopers are all waving their swords about at the gallop. So now it was time to convert the troopers. I lopped their bloody arms off - poor buggers. Using the Dremel disc cutter, I made quick work like a field surgeon. I finished them off deeper with a blade and drilled receiving holes for the replacement arms. 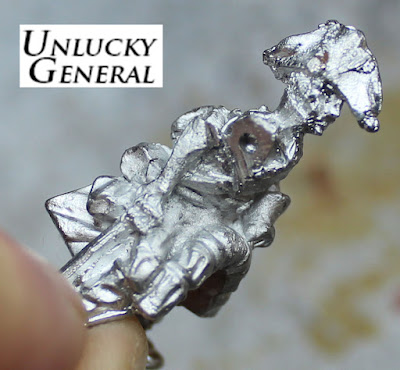 If you are like me, the longer I pause and mull over a new project, idea or experiment, the more likely it is I have that Eureka moment. I initially thought I'd be cutting grooves in the crooks of their sword arms and intended to fashion a bend at the elbow and re-attach the removed limbs but after several days delay I remembered Great War Miniatures. 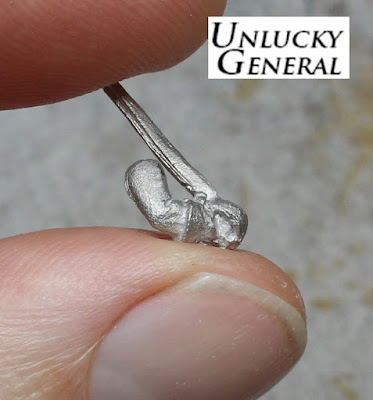 For my Balaclava Project (see my other Blog) I have the entire Heavy Brigade in 28mm (60 figures) all of whom come with separate and alternative arm poses. After rummaging through that box of white metal (I have several as you might imagine) I found the spares. What was even better, they matched. 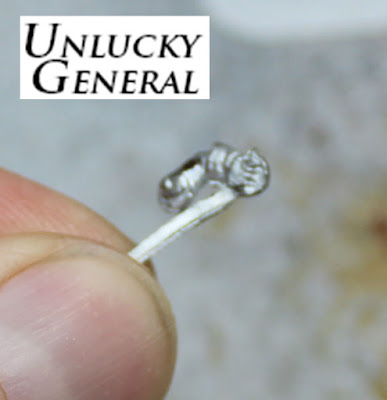 I'm sure it didn't look that fuzzy through the view finder. I should have cleaned under my fingernails also - I do apologise. Anyway, you might make out the nipple join at the shoulder - hence the need to drill out the receiving holes.

This was as lot of extra work on top of my usual practices of drilling out the trumpet bells and so on. Each of my six man squadrons has an officer and trumpeter as after years of gaming, I have come to realize cavalry rarely fought in whole regimental formations. I'm playing my cavalry differently from here on and they are going to need identifiable squadrons. I intend writing up a House Rule guide on that at another time. 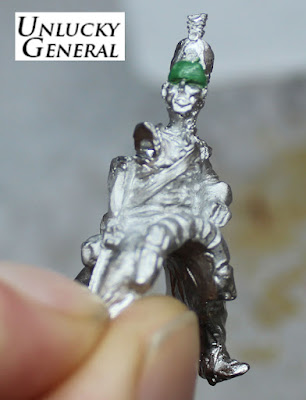 To double down on diversity, I cut off half the watering cap peaks and sculpted raised visors using Green-stuff. Perhaps it's the adjustable visor which makes the shako a watering cap? 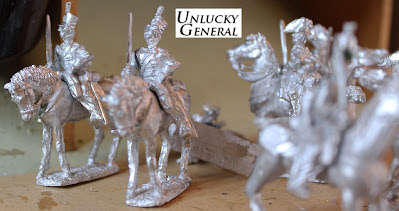 Making sure to sand the backs of the horses and file-clean the inside of the saddles (sculpted with the riders) I used a goodly amount of two-part epoxy to fix and seat the rider to the mount. In the past I have drilled and pinned them also but the bare metal bond should be enough - certainly feels it. 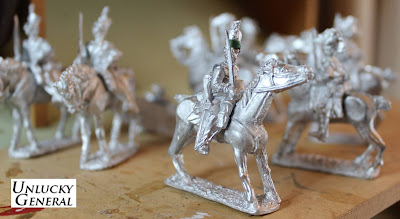 In the end, it has proved much cheaper but a lot more work. On the positive side, I'll have a unique cavalry unit which is always nice. I'm super keen to start painting but really should finish my Coldstream Guards first - I wonder what I'll do.