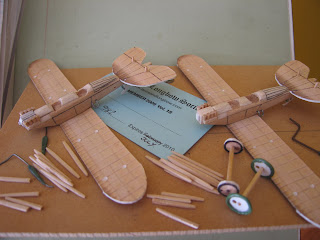 If ever anyone was contemplating undertaking a similar project to this build all I can say is good luck. I warn you, you are going to need a lot of spare time on your hands. Unlike a kit build, your assembly time gets eaten through by the need to engineer your own parts. This morning I have spent over an hour shaving down cocktail sticks to get them elliptical (cross section) and tapered at each point - maddening. I have part-drilled holes in the wings to receive the struts but the advantages in this model will be the joining of the central four struts for each aeroplane to a solid balsa fuselage.
You can see from the first photo I have also assembled the wheels and axle - one from the card model print-outs and the other from my Green Stuff tyres and 1mm styrene hubs. Both axles are, once again, cocktail sticks. On the matter of cocktail sticks, they have a medium density grain which takes a lot of shaping. I was able to carve and sand a 'male' join at both ends of the axles to glue into the wheel holes for a stronger join. I also shaved down and cut tail guides for the rigging. 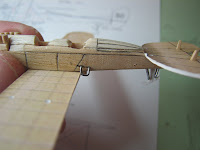 Similarly cocktail stick cross sections have been used to join the exhaust to the fuselage, underneath just behind the bottom wing. I have crafted a stirrup or step for the pilot out of wire. The benefit of a solid balsa fuselage is also that I can insert wire parts rather than just glue them - they've gone in quite deep.The tail skid is styrene with wire supports, all fixed with Supa Glue. 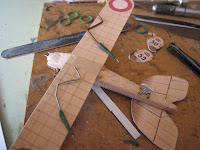 The exhaust pipes are also of wire with Green Stuff mufflers which of themselves have created a stall in the build whilst I wait for them to cure sufficiently before installation. In the meantime the painting of the crew has commenced. At this stage I am planning on making balsa skid assemblies for the undercarriage. Again, with the fuselage being balsa I can fix them into cut recesses at just the required angle and once adhered to the wheel axles, they will make for a strong, light weight frame for this model. You may notice from the detached rudder that I have doctored the numerals to make aeroplane number 59 as well as 50.
I will be taking a half-day break from this project to finish my Prussians which are finally ready for their finishing touches. I will be back at the Be2s by tomorrow morning; however, as I am determined to finish this now that I have started and put so much time into it. I don't want to set it aside because I've run out of puff.
Email Post
Labels: Aviation British First World War Models