﻿ ﻿Well here's a lesson learnt the hard way I must say. Built and painted about a year or so ago, the image here is of my Pfalz EIV eindecker and those with a not even keen eye will see that this has been repaired. After only it's first outing the always shaky rigging frame above the fuselage snapped - after all it's only plastic. 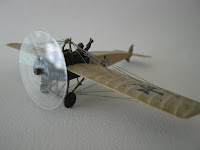 Like all of my aircraft, the Pfalz is rigged and this time, as with my Avro 504, the rigging is of light weight fishing line. This is essentially done with one continuous strand which I wove through the umpteen holes I was required to drill in order to pass the rigging through the wings. For me, even more so than bi-planes, the eindecker is a model requiring rigging due to it supporting the entire structural integrity of the airframe. My model is an ACM 1/72nd scale kit which I understand is still readily available. The kit itself was an easy assembly - I just like to make things more difficult for myself. For details of the pilot, see my posting on the Avro 504.

First built in 1915 in order to emulate the French Morane-Saulnier H, Pfalz competed with the better known Fokker machines and by 1916 the EIV variant (my model) had hit the skies. They never were as effective a machine as the Fokker and by 1916 were operating in peripheral theatres of war. 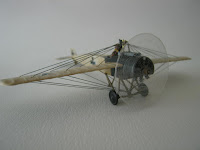 As far as my lessons learnt is concerned, if I make another mono-plane (and most probably will) I will construct a central steel frame or use brass rod to support the strain of the rigging. Also, using fishing line caused a bunch up around the central hub which became trickier to glue toward the end. As the plastic frame bent before finally breaking, the tension was released and my rigging lines begun to bag. I have effected a brass rod support, drilled through the fuselage behind the rigging frame which, whilst obvious, appears to have done the trick.  I'll just have to live with it. 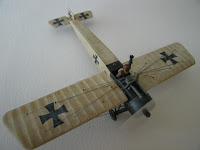 Given the take up for the rigging points, my next eindecker will require an all metal central frame which includes the under-carriage. I have to say it was a great little kit to built and I derived a great amount of satisfaction with my first early war aeroplane. 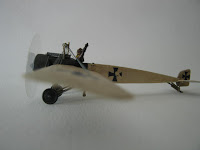 Everyone seems to concentrate in later Great war combat with wall-to-wall Albatross, triplanes and Sopwith Camels. Certainly by the late war, the paint schemes were flashier and I have to admit to loving the Albatross airframe - I mean, who doesn't? For me, at least at this stage, I suppose I feel like starting at the beginning, just as the aviators did themselves. 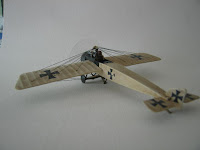 Concepts in airframe design became more standardised in some respects by the end of the war as experiments had been tried and tested. For me, there's something bizarre and exciting in building, gaming and essentially recreating the novelty of conducting missions with experimental designs of immense variety and originality - albeit over the table-top. 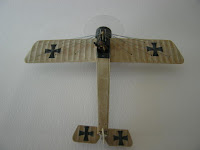 I have suggested to my good mate Matt, Master Gamer at the Goulburn Wargames Group that we ditch our previously suggested campaign for this year and opt for Great War aviation. It's less intrusive on our existing project commitments and exercises a common daemon. I think I have convinced him. By the way, apart from being damaged this kite was downed by my 504 in it's first op. C'est la vie.
Email Post
Labels: Aviation First World War German