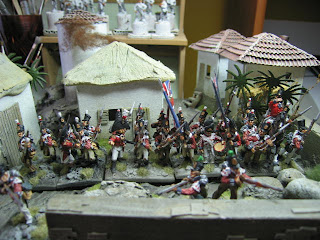 I finally finished my penultimate brigade for Spencer's 1st Division of Wellington's army at Busaco, 1810 in 28mm - namely the King's German Legion (KGL) brigade. It was a long time between battalions for this one - four in all. Due to departures from the period this was several years in the making which most probably should not have been the case given that it consisted of some of the smallest battalions in my army - from 22-26 figures. By way of historical background, the KGL units were present throughout most of the Peninsular campaigns and by 1810 were considerably reduced from their full compliments. In wargame figure terms, at a representative troop scale of 1:20, a full battalion comes in at around 48 figures (fresh off the boat). The performance of this brigade on the table top should always do reasonably well, balancing their veteran status against reduced numbers - I hope. 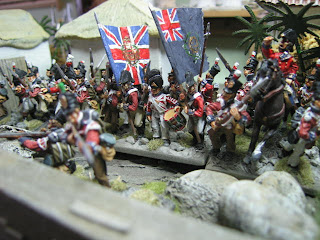 My battalions for Napoleonics always consist of a core of Elite Miniatures - supplied by Elite Miniatures Australia. They are a good quality product and whilst not sculpted to the same detail of Front Rank or Foundry, they are a particularly good figure to paint with just the right amount of detail for the rank and file - especially for large battalions which a 1:20 troop scale tends to produce. Another feature I partucularly love about Elite is that they use a pewter based metal which is light and rigid so there is no such thing as a floppy looking bayonet - a widespread phenomena in wargames armies and one which is unacceptable for me. My officers I buy from anyone - I rather like to mix it up with these chaps and will dig deeper in my purse for them. I have several per unit to represent company commanders within the line. In my KGL units I have used Foundry and Elite.

No one makes a bearskin drummer for the KGL which Mike Chappell's The King's German Legion (1) 1803-1812 (Osprey Men-At-Arms 338) tells me they had. I cut the shako off with wire cutters, filed the figure off to a point above the peak and sculpted the bearskin using Miliput or Greenstuff. By the way, it was some time before I saw what they looked like from the back and the cap should show the white horse of Hanover on a red field - which mine now do. 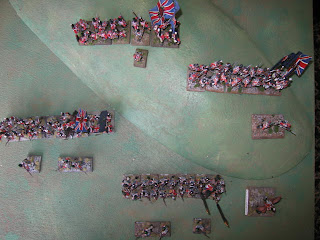 One thing about the KGL battalions is that they were completely uniform; the only identification being the numbers on canteens or regimental colours. For my benefit, after the first battalion was finished, my three subsequent battalions have their numbers painted in black letters on a white background on the back of the right hand corner of each base - 5KGL, 2KGL and so on. This is a habit I will cultivate from here on with all of my armies methinks.

I have my skirmishers for each battalion represented proportionally. The rules I use (Grand Manner) provide for skirmish units of 6 figures which is a problem for me - my skirmishers being swept aside easily unless amalgamated for the brigade into one unit. I advise anyone wishing to represent their armies according to historical returns to make an exception with your skirmishers if figure numbers are important for game mechanics. 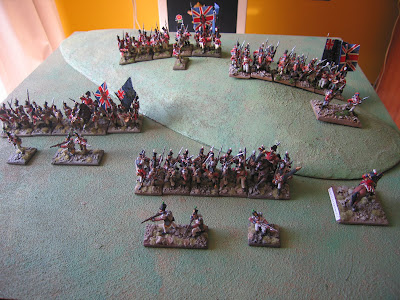 For one of my battalions I decided to sculpt the unit colours furled and in their cases - a simple matter of forming Greenstuff over 1.25 mm wire. This would have been better depicted on a marching unit rather than mine which is advancing (as they all are) but I've learned to live with it. My bridage commander was tricky in that every order of battle I possessed (and there are a few) only referred to generals my their surname. I have developed more of an interest in my command figures over the years and I wanted to know just who this Von Lowe chap was. My research attempts on-line proved fruitless but thanks to a helful contributor to the TMP forum I received a two page life history of Brigadier General SCGF Von Lowe. These details are important to me insofar as I know now if he had a brevitt rank and can surmise what uniform distinctions he would have worn in the field. He is represented by an Old Glory figure.
Posted by Unlucky General at 5:49 PM