Only a little while ago I embarked on this modelling project as a compliment to my early imperial Roman Army and I think I can confidently predict it will be my first and last effort at an elephant. It took longer than I imagined and was extremely fiddly. Nevertheless, thanks to Diodorus, I had the excuse to work toward fielding a model I had always wanted. 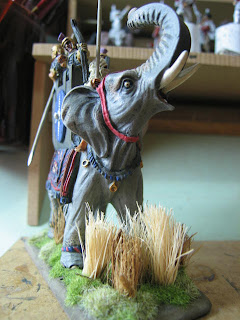 I always contruct my models (from cavalry figures to chariots) prior to undercoating and painting. I used Selleys two-part epoxy Araldite to build the model. The resin elephant came in one piece (including the howdah and the bottom half of the mahout). I had lost the upper half of the mahout so used the upper half of an Old Glory Bedouin rifleman from their Sons of the Desert range I had spare from another project. The fighting crew were minor conversions of Old Glory auxilliary archers - including the spearmen - and the shields were added to the howdah to Romanise it a little more. 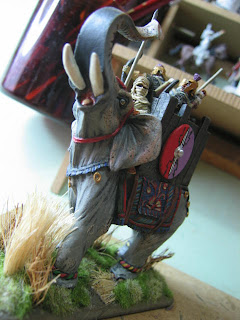 The painting is all in Humbrol enamels - a boyhood habit I have never shrugged, and the elephant colouring is based on several pictures obtained through Google Images on-line. I always prefer to paint from real life, so there was never a question of producing a generic grey elephant. You may notice the speckles about the ears and along the spine. The only comment to make about the crew and mahout is that I make all of my spears for 25mm  figures from 1.25mm steel wire with hammered and clipped heads. 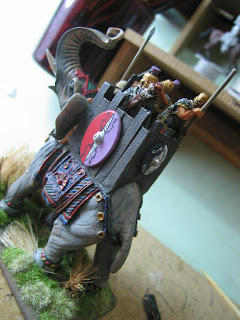 You may notice that one of the grass tufts has been flattened under foot to create an illusion of weight for the animal. Particlular attention was paid to the eye (again from close shot images) and the tones of the tusks which are finished with gloss varnish on top of the overall matt spray coat all my models get.

Whilst I finished this project about a year ago, it had it's first outing in December of last year and contrary to all the rules of wargaming, it actually did rather well - before going berserk.
Email Post
Labels: Early Imperial Roman Roman