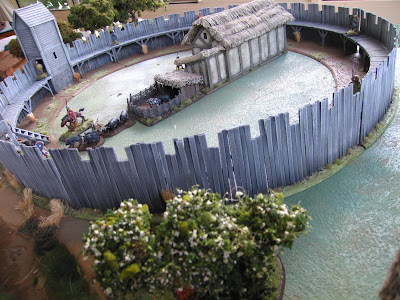 This is one of several fortifications I have modelled over the years and it won't be the last. It is a 25mm model and is based on reconstructed drawing of Mirville castle in the 11th century. In fact, this model was an after-thought insofar as the tower is an add-on to what was actually constructed as a curtain wall for a greater castle, the late 11th century motte and bailey of York - but that's another article. 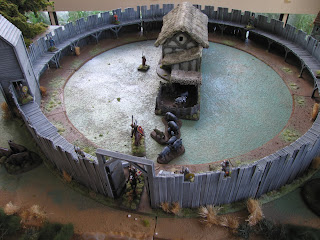 It is built in six sections, one of which is broken into a further three sections including the tower section. It is of balsa and craft-stick construction based on MDF craft wood. Everything in shot throughout this posting is scratch built apart from the livestock and figures. The weathered woodwork so important to this model is achieved through repeated applications of black wash over a gey acrylic base with alternate dry brushing of lighter greys. Personally, I still find it too dark but you have to call it a day some time and I can live with it. The door is fully functional (quite a bit of mucking about there actually) and the tower is built in two stages for the placement of figures within. 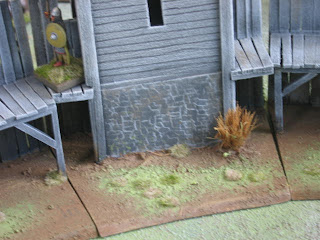 The stone foundations were achieved by an experiment which worked well I think. I painstakingly drew the stonework using a hard pencil on foam core (foam sandwiched between two sheets of paper) - the impression making the mortar lines, throwing the stone into relief. I thinly washed it in white to achieve a lime mortar then dry brushed from a mixed grey/brown palette. In future when I make a large stone keep I will opt for pre-embossed plastic or card stock. It is all too easy to tire when working on the base but I took the time to grass the bases around structural points of contact and allow for wear and tread, grasses and weeds. 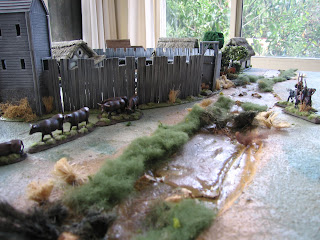 The whole model as seen here packs down into a standard sized archive box - essential for storage and transportation. The only issue with building fortifications for wargaming is that you need to ensure that the oposition has the means of challenging the defenders to make a game of it. This thus far, I have failed to do. Whilst I have bought two of the Gripping Beast Onager models I have yet to build them. I have plans for mantlets, ladder crews, a battering ram and a fire wagon. Then I suppose I'll need to turn my attention to making some wrecked sections.
Posted by Unlucky General at 11:04 PM