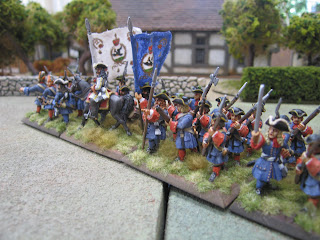 More than two months in the construction, what was meant to be a break from Project Lewes turned into some bizarre epic build in itself. Nevertheless, the first of the Prussians, my Kroonprins Von Prussian regiment in Dutch service is complete, bringing my United Provinces army for the battle of Ramilles up to three battalions in strength. Whilst that seems rather paltry, in fairness these battalions are 33 figures strong, bringing the figures painted up to the hundred mark. 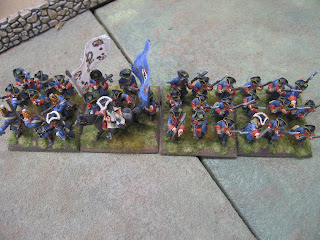 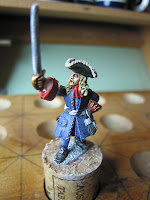 I have to say, in appearance the Prussians look alarming similar in uniform detail to my Swiss regiment thus far - all blue with yellow lace, even down to the red stockings. For me, apart from regimental labels painted on the rear of the bases, these Prussians do have red neck cloths and they also have grenadiers which the Swiss lacked. Other than their leather breeches, there's not a lot to distinguish them from my Swiss other than the colours they rally to - more on that further on. 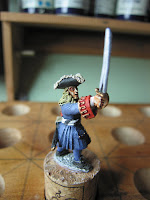 The officers perhaps are the most distinctive with their black and white sashes - with no more details to hand, I elected to make them in alternate bands of colour with minimal silver inclusions - no gold tassels. Each of my officers has a different coloured wig, representing the hair colour range of the figures within this regiment - I always vary within each unit I paint. If I haven't stated so before, it is probably the wigs that got me into this period and a motivating factor in my plans to collect in the preceding period ... yet another project.
﻿
﻿
I have made one of my officers an officer of grenadiers. This decision is essentially speculative but not illogical. Like the grenadiers themselves, the blue cuffs which further distinguish them from the fusiliers are of a different hue and are so depicted on the officer. I ensured I have one officer per division which, in my representation is one officer per stand of nine figures three ranks deep. 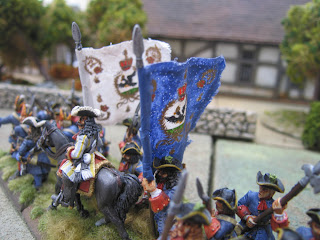 ﻿
The flags are hand painted (as usual) on tissue paper, matte coated and then battle fatigued with a pin and frayed with a scalpel. Whilst weathered, I did not want the colours dirty, given the care taken with them generally. I hope my flags indicate a veteran unit but entering the field of battle fresh. The next unit flag I construct will be using gauze as an experiment - I hear great things. 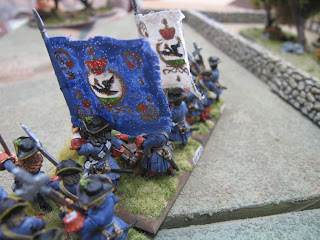 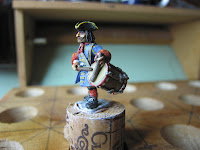 The drummer has a generic and long standing Germanic pattern of red and white hoops with an unadorned wooden body. I have no idea when this started but the red and white scheme can be seen on Prussian drummers for succeeding generations through the eighteenth and nineteenth centuries. So, I just back dated it to the start for this unit.
﻿
﻿
Unlike my other two battalions thus far, my Prussians are advancing with grenadiers lobbing grenades - why wouldn't you? Every previous advancing posed figure I had has been stripped and used for the core of the battalion which, save for the drummer, is bolstered with Front Rank figures for all officers, sergeants and two fusiliers. 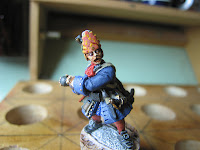 I have to admit that I am relatively satisfied with how my grenadiers turned out. I had my doubts for some time but they look to have painted up fine. I elected to paint the raised, reinforced front of the cap rather than build it. About the only thing I'm not entirely convinced about is the faded red for the cap itself. I think a deeper red would have brought out the yellow embroidered details far better. 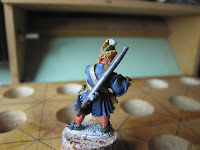 If anyone reads this who had any clout at all with Front Rank or other manufacturers , then I make an appeal for them to release some Prussian grenadiers if they haven't already. Don't make others build these like I had to do. A properly sculpted Prussian grenadier will make mine look shabby but surely it's a small gap which needs to be filled in this period?
﻿﻿
﻿﻿ 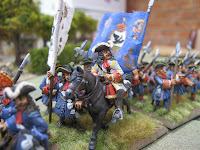 I took some care with my colonel commandant and as stated previously, he is the only figure I elected to paint in civilian attire. Taken from a pattern I found on-line, his coat is pale grey and white striped with a yellow stripe in-set. His hat, like others, has a feather or fur trim which I dry brushed white over an ochre base. Normally I would do this over grey but I think this works well. 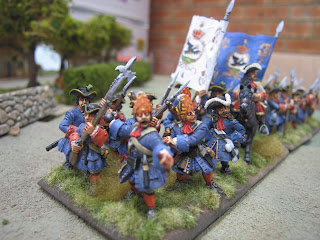 My next battalion for the United Provinces will be Dutch proper. My good mate Matt of the Goulburn Wargames Group has advanced be a stack of marching posed Front Rank figures. I haven't really done a marching battalion before. I have a number of battalion guns and one is being wheeled by its crew which will be perfect for the model as a whole. I will also have to think about doing at least two squadrons of Dopf's dragoons. In the meantime, please look for my next posting which is this battalion's accompanying casualty marker - something a bit different.﻿
﻿
Posted by Unlucky General at 7:42 PM