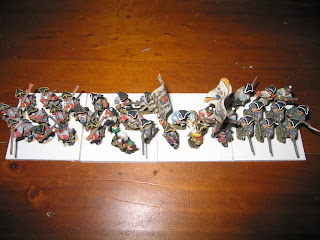 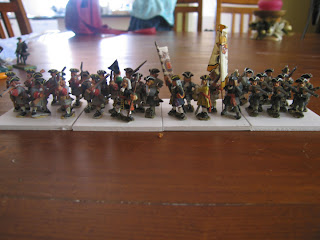 In 1994 a good friend of mine and I ventured back into what I call serious wargaming with the first of what turned out to be an endless series of 25mm miniature armies. The first army was my Anglo-Dutch effort for the War of the Spanish Succession (WSS).

If memory serves, we used a set of very simple fast play rules by Stuart Asquith which relied on morale classes A through D which dictated precisely what a unit could or could not do, depending upon the casualty rate. For example, a battalion remained at A class morale until it lost 25% casualties whereupon it could no longer advance but could still give fire - and so it went. We found it difficult to achieve anything other than a stalemate so developed our own variant which relied on unit commanders' characteristics to overcome limitations incurred through morale classes as affected by casualties.

We were then introduced to wargaming in the Grand Manner for Napoleonic armies which took us to a whole new level and our WSS armies had been shelved ever since ... until now.

What changed? Well, I've been waiting for a good set of rules to come along which combined both fast play elements and national characteristics within the right flavour of the period. I also tired of learning and attempting to recall multiple rule sets and systems across theatres and periods of warfare (I game in many eras). So, I have have embraced Warhammer Ancient Battles ECW rules with a variant as published by Dave Watson through Wargames Illustrated.

Grand Manner gaming introduced me to armies with a 1/20 troop scale which provide for a greater number of figures to represent a unit and I have to say that for me and others, once you go there, you can't go back! My previous army was based on the old Wargamers Research Group concept of 1/50 troop scale so I realised I needed a significant upgrade. Something else which had changed over the past 16 years has been additional research which has come to light and been published and the development of the internet and the populating of it with much research and material for the wargamer - something I hope to add to through this site. We had previously relied almost exclusively on Charles Stewart Grant's From Pike to Shot 1685 to 1720 which is still invaluable as a resource I might add.

When I had collected my original army there were only two manufacturers to choose from - Dixon Miniatures and Wargames Foundry. I cannot recall if Old Glory had provided for the period at that time but they weren't on my radar. My additional figures for the reborn army will be coming from Front Rank initially, with Reiver Casting and Old Glory to follow. I like to mix as many ranges within my units as possible and this army will be no exception.

The President of the Goulburn 'Pikers' (my club) and I have agreed on a basing system for figures mounted in three ranks. We haven't seen this done before but it will provide for representation of platoon firing in the formation of the period with bases of 60x60mm accommodating 9 figures. My Dutch battalions are generally to be represented by units of 33 figures representing 80% strength at 1/20 troop scale providing for 3 x 9 figures bases and a command base of 6 to include drummer, standard bearers and Colonel commandants.

The above shots are a mock up of what they will look like. I await the arrival of my figure order to get underway and will post a blow-by-blow of how my first reborn unit evolves.
Posted by Unlucky General at 12:52 PM

Labels: War of the Spanish Succession