Bring up the Guns!

In a seemingly endless build up of my British Peninsular amry of 1810, I determined upon the addition of a battery of Royal Horse Artillery. Let me say that having had none previously had been a right royal pain as in the rules I play (Grand Manner) my enemies were getting two shots in per bound with their horse artillery to my one with only foot - enough was enough! 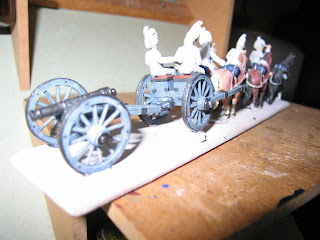 Our club house rules are that each battery requires one limber model if you want to be able to move them and there certainly ain't no point in galloping guns with no gallopers so an order for one limber was duly placed with Essex Miniatures. At the time of purchase Essex were the only manufacturers to my knowledge. I assembled the model in its entirety and for pieces on this scale I based them also, prior to undercoating. You will see from the riders that I undercoat in white principally becasue this is how I developed my approach in the beginning but more so nowadays so I can see what I'm painting. 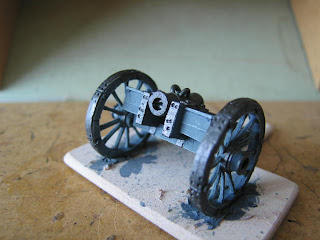 Similarly, I built and based my gun models (all Elite Miniatures) prior to undercoating and painting. You will see that I base my models and figures on 3mm MDF sheet which I cut and chamfer. Beneath the based I cut and  glue single sided magnetic sheet as I transport my models in metal tool boxes and this is wonderful in preventing movement and protects the figures.

All of my horses are painted from a common reference work, Tasmin Pickeral's The Encyclopedia of Horses & Ponies which provides a comprehensive selection of breeds and colour schemes if you are particular about that sort of thing - which I am. 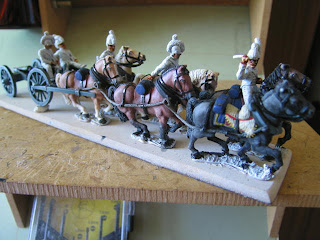 I support the bond between the mounted figure and the horse by drilling holes in the base of the rider and the saddle and fixing it with a steel wire pin when gluing them with Araldite. Anyone wishing to try assembling a model of this size before painting as I do should heed this warning - it is heavy, awkward and prolongs the painting project considerably. The finsihed product; however, is robust and utterly intact.

I took some time to manipulate the two crew riding the caison and to vary the posing of all figures as much as possible which, happily, the Essex white metal freely allows. I wanted to animate the model as much as possible as I wanted my limber to look like it was moving at pace. Generally, manufacturers do not provide this in their limber offerings and Essex were no exception so I was limited by the poses of the solidly cast horses. You may note the rock (a piece of mouse litter) placed under the right wheel of the casion and the crews attempt at regaining their balance. 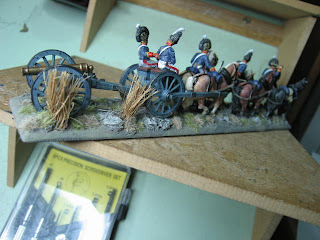 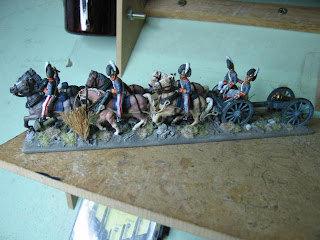 bases are sculpted with pre-mixed wood working putty into which I press mouse litter for rocks and pieces of grass matting is glued into drilled or cut holes prior to the sculpt. I then cover the dried 'ground' with a diluted mixture of Selley's PVA to fix any loose litter and commence painting once dry.
For this battery I based my deployed crew seperate to the model for casualty removal or evasion - one of several options. The crew figures are Front Rank. 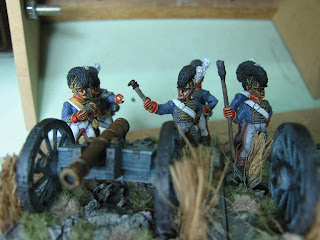 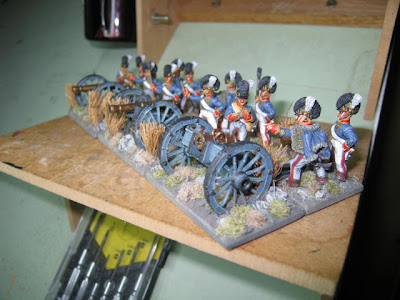 Posted by Unlucky General at 11:52 PM