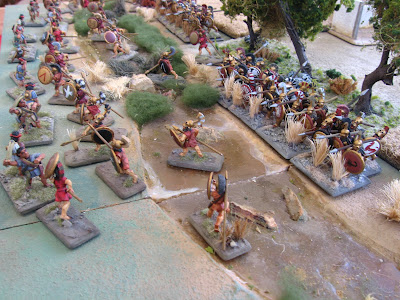 Being a Warhammer Ancient Battles (WAB) player, there arises the question of Spartan Ekdromoi or armoured slaves (helots) and how to play them. In WAB terms they are an un accounted for troop type to date in that no developed army lists or specific book has been dedicated to the period: or at least the Persian Wars period of the 470's BC. My chosen army is intended as a nucleus for the Spartan coalition army under Pausanias at Plataea in 479 BC - the little dramatised but great land battle where the question of Perian dominance was settled. 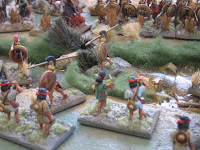 I say that Ekdromoi are unaccounted for in that within the WAB rule system, hoplites are not accorded the liberty of dispering from phalanx  into skirmish order and fighting as light infantry. Fighting in phalanx and breaking out to skirmish; however, is precisely what Ekdromoi did according to the texts and in fact Ekdromoi, for the uninitiated, means 'to run out'. For those familiar with the battle of Plataea, this is potentially an important distinction as according to Herodotus, the Spartans were in attendence with seven Ekdromoi (or Helots) to every Spartiate citizen hoplite. 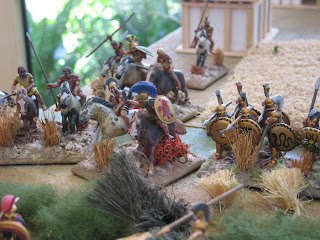 Given the relative popularity of Sparta within the enduring imagination of the wargamer, this limitation presents an ongoing question about how best to model and play this particular troop type. Unless a future suplement from Warhammer defines the rules surrounding Ekdromoi, a player may either base them as a lesser armed phalanx formation (being either naked or merely clothed with helmet and shield) or as skirmishers with shield - albeit a large one. House rules can, of course, provide for both where some compromise in points would need to be agreed upon. Personally, it seems reasonable to me that they should be paid for as a hoplite with an appropriate reduction in points cost for loss of body armour but should retain the cost of being drilled to allow the adaptability of formation - particularly if you propose to allow them to reform into phalanx at any stage in the game. 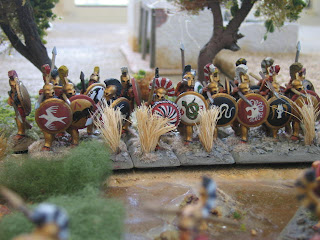 As you can see from my models, I elected to build my army from First Corps Spartans and I continue to prefer them to any range I have seen since buying them about eight years ago. To further differentiate the Ekdromoi from my other troops I made their shield designs using drap mixtures of russets, browns, black and white. Their helmet manes were of natural colours as one might find stright from the horses tail so to speak. Their tunics are faded reds, brown and oranges when worn. Their shild designs are more simple than my Spartiates who, during the pre-uniform Perian Wars period, tend to be more colourful, but not as gawdy as I would make Athenian or Corinthian designs. 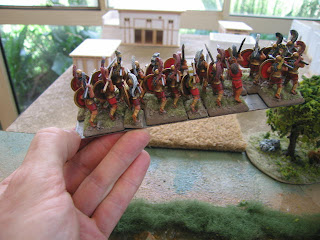 If I ever revisit this army to expand it to the full compliment for Plataea, I would include a couple of throwing spears in the shield hands of my Ekdromoi for at least some of them. As you can see from my holding up of a Spartan phalanx, my figure bases are magnetised and whenever forming larger units my bases simply clamp on - particularly usefull for my Ekdomoi all of which are based singly. This satisfies my long standing dislike of chunky movement trays. 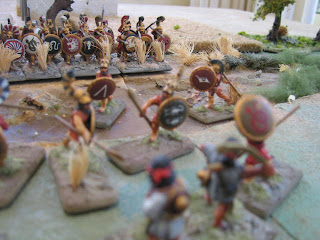 As for the hard corps hoplites in my army, I based them as close to overlapping as the models and the WAB basing distances would allow with the second row offset from the front rank. Whilst it may have been nicer still to base them three deep, my shield designs (all of which are hand painted) for the third rank would be obscured. In any event, for gaming purposes, whilst I have only played my Spartans a few times, they can take an awful beating, always dish out far worse than they get and don't seem bothered about a lack of rank bonuses.
Posted by Unlucky General at 9:43 PM