Having replaced my improperly constituted 52nd Oxfordshire Light Infantry I found myself with 48 painted line infantry which needed repurposing. As luck would have it, two battalions in the first Brigade (Stewart's) fighting in General Hill's Second Division had the same buff coloured cuffs and at 1:20 representative troop scale they came in at 25 and 20 figures. All I needed was some extra figures such as additional ensigns and some officers and I was good to go. Or so I thought. 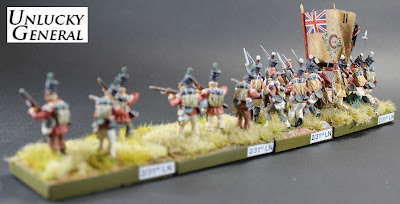 The first of the repurposed battalions was the 2/31st Foot. At 20 figures I was able to make up the battalion almost entirely with the old figures. I did need to re-base most of them and make new colours but as it turned out, almost all of my old figures had the light company shoulder wings so some new centre company figures were needed for the two battalions to follow this one.

The above colonel's colour illustration is from the descendant regimental website (The East Surrey Regiment) and is a speculative design for how the colour likely appeared at the time of the 2/31st's disbandment after 1814. Given that my battalion represents how they formed up for the battle of Busaco in 1810, I chose to use the above colour but dropped the battle honours Gibraltar and Peninsular which they would not have had at the time. 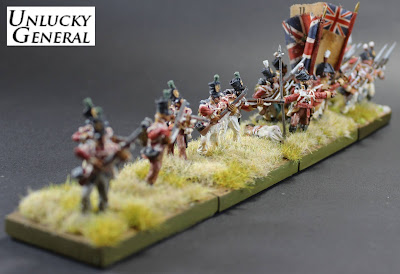 The 2nd battalion was raised in 1805 and commenced in the Peninsular with 784 all ranks so it has seen considerable action and lost significant numbers by the time of Busaco. So, my battle standards are rather worse for wear and shot up: I'm hoping that can be seen in the shots but the way I base my figures, much detail can be obscured in the crush. I had done battle-bashed flags before with my old tissue paper technique but not with my recent material approach and I am very pleased with the results. 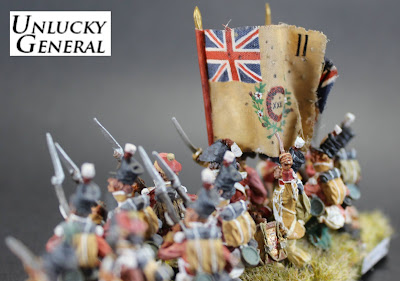 I had explored the usefulness of ultra fine paint-pens from an artists supplies shop. Painting the tiny writing on the rings with a 000 brush on painted fabric was not fun and I thought I might do better with a different method. I was wrong. The motif rings on the King's colour are thick, wobbly and bloody ugly but you can't see much of them thankfully. 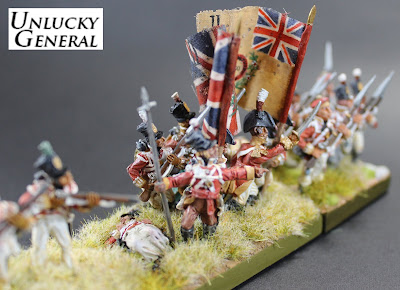 The only additional figure was the casualty miniature. I really have improved noticeably over the years since I painted these but the old paint jobs will do all the same. Oh, and all of these figures are from my favourite Elite Miniatures range. 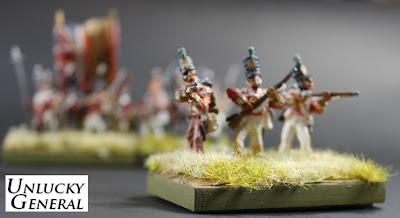 What's really different about this unit is the static grass bases. I've covered them almost completely in static grass tufts I made using a Noch 'Grass-Master' electric applicator and I have to say I'm extremely pleased with the results. I made a stack of squiggles and lines using a dry grass blend in imitation of the high summer grasslands surrounding Talavera. I then cut them to fit where needed until the bases were covered. The grass now stands irregularly at about shin height. I will experiment with taller grasses in future.