I've been excited and motivated to build this unit - or should I say re-build? It replaces an existing representation in my British Peninsular army of the same regiment using incorrect figures - which had the line regiment shako plate instead of the bugle badges. I've known about this for a dozen and more years and finally did something about it. 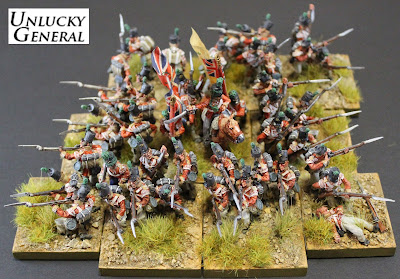 Both this unit and the one it replaces are a whopping 48 figures each. The 52nd was replenished and had arrived back in Portugal in time for the Busaco battle which was it's first major engagement in this theatre. 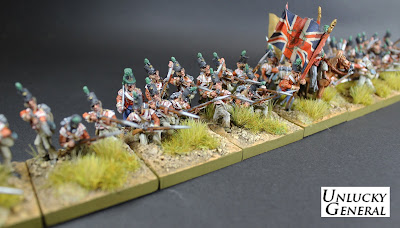 The core of this unit like most of my Napoleonics is made up of Elite Miniatures. Unlike my previous version, all of my officers have the correct light infantry officer shako and this time I also have a mounted Colonel. 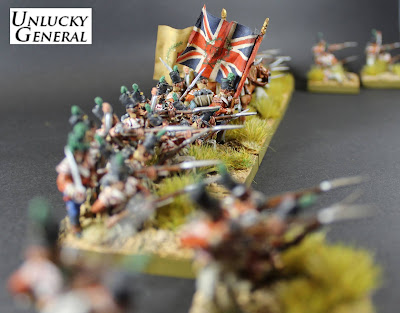 The Colonel is a left over Light Infantry mounted Colonel from the Perry Miniatures range I had bought for making higher command vignettes. The rest of the officers, sergeants and bugler are from the Perry's light infantry command set BH53 being their 52nd set - makes sense yes? The casualty is from Offensive Miniatures and I have a feeling the bare headed drummer is also.

Clearly I went for a firing line so all of my rank and file are either standing and kneeling firing and loading. I imagine them at Busaco delivering their devastating volley. This particular unit is one to make my enemies shudder.

My good mate Grant (the Frog) and I are experimenting with our Black Powder house rules for light infantry - which is inadequately represented in my view within either the core rules or supplements. For us, a true light battalion is capable and often did deploy all into a skirmish formation so the Black Powder Mixed Formation needs to enable deployed skirmish shooting values to exceed the flat 1 dice. 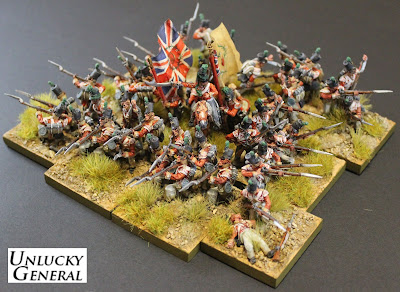 One option under consideration is to allow the Mixed Formation deployment to shoot at the full battalion value (in this case up to 5 dice for a 'Huge' unit - another house rule). To properly represent the battalion's skirmishing capability and options, I have based more than our standard 6 figures as skirmishers (our standard light company representation) and gone for 12.

In Black Powder it's not important how many figures are deployed forward in skirmish order but I have long followed an old Grand Manner tradition of a company's worth - usually six. 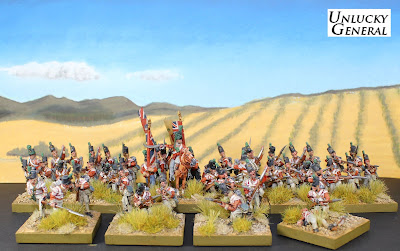 I'm thinking 12 skirmishers provides flexibility in permitting an increased skirmish screen option. If for some reason I want to retain the close order line formation for the rest of the battalion I can opt for a greater skirmish line and chose a shooting value of say 2 dice. I'm thinking the light battalion should chose what value it wants to put forward providing it's less than 50% to retain the rest of the battalion's close order integrity. In this case my unit of 48 figures can only opt for 2 dice out of a possible 5 before it has to deploy the whole battalion and move from close order formed (mixed) into an open order skirmish line. 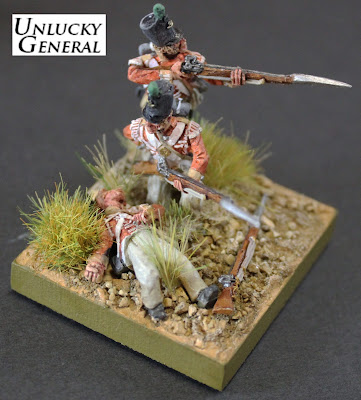 For when I elect to deploy the whole battalion into open order skirmish, I will separate the main body's remaining 6-six figure bases by a small margin and off-set them slightly to show they are in open order. That is something similar to an old In the Grand Manner convention. 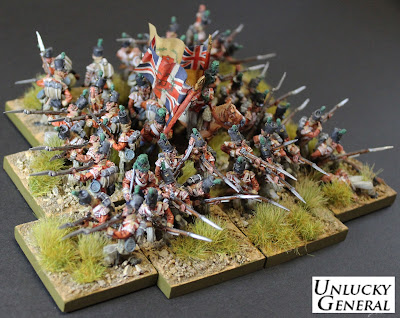 The 52nd colours are variously depicted and I opted for the standard wreath and shield variant. I'm not entirely convinced I made the right choice as I since found example illustrations with a pinched shield and elliptical open wreath. Funny thing about painting a unit and playing with it. I go to great lengths detailing a unit when I create them knowing than neither I nor anyone else will ever scrutinize them to the same degree again. I wouldn't have it any other way.

Prepping these figures took an eternity and whilst I frustrated myself in doing so, I was determined this time to finish the colours first prior to fixing them to the ensigns before undercoating the whole unit. I've shown how I make flags these days in a previous post so I'll not repeat myself. I did replace the cast flag poles with steel wire, drilling out the finials and gluing them on - a tricky business. I've gone for no chords for their colours just becasue a planer flag seems right for this light battalion. 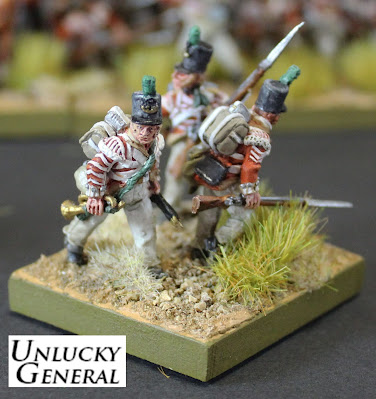 Now that I have the correct looking unit to represent the 52nd regiment, I have freed up 48 painted foot which can be repurposed into likely three other battalions with a couple of extras. If my Napoleonic muse continues to sing (which remains to be seen) I may even crack on and paint some Guards which I finally purchased and they will finish my First Division ... will wonders never cease? Then I will look at some Spanish and Portuguese. It will of course never truly end. 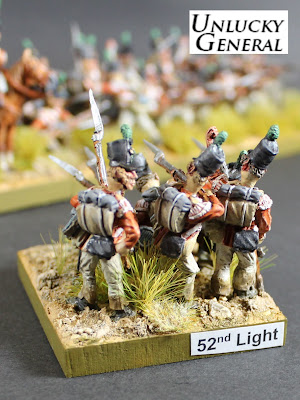 This has been the first serious re-visitation of my Peninsular army in over a decade and I'm loving it. If I crack on with repurposing these fellows' predecessors, I'll have added a further three battalions to my order of battle.